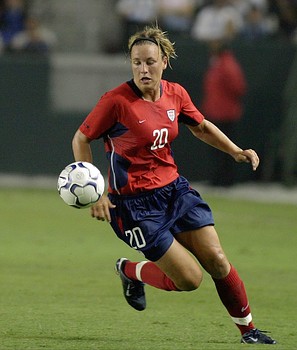 Abby Wambach headed in the winning goal for the United States in the 22nd minute of overtime against Brazil, clinching the 2004 Olympic gold medal in women's soccer. In the 2011 FIFA Women's World Cup she again headed a ball into the goal against Brazil to tie the game, which the US eventually won. She is currently tied with Michelle Akers for most World Cup goals for the US at 12 goals. In 2012 she won a gold medal in 2012 London Olymipics for women's soccer.

She was a soccer and basketball star for Our Lady of Mercy High School, earning national Gatorade Player of the Year honors as a senior soccer player. She went on to a stellar collegiate career at the University of Florida before earning a spot on the national team roster.

Ms. Wambach is also a primary reason that many Rochesterians feign an interest in women's soccer. This interest will only be more intense in 2013, as Wambach has been assigned to play for the local WNY Flash by the new National Women's Soccer League.