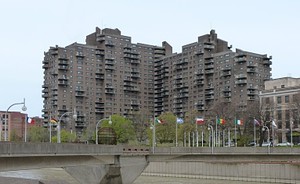 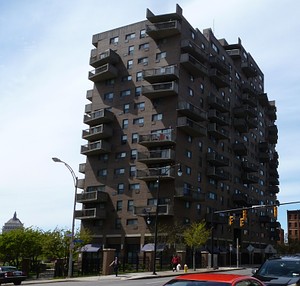 Andrews Terrace is a 22-story apartment building located in the St. Paul Quarter, overlooking the Genesee River. It is HUD Section 8 housing designed especially for elderly and disabled residents, with rent based on 30% of income. Thirty of the units are available at market rate. Utilities are included.

The 526 units consist of studios and one- and two-bedrooms apartments.

The building was originally called The Plaza at Genesee Crossroads. With rents of $270 to $460 per month (1975 dollars), the $20 million complex was intended to draw middle-income residents back downtown.1 It was later converted to senior housing and known simply as the Plaza Apartments.

Pathstone bought the building in 2007 and gave it an extensive renovation.


2013-06-20 16:03:38   A friend of mine lived here until a few months ago. She says the inside is very nice and, according to her case worker, has larger units than most subsidized housing complexes. However, the St. Paul Quarter gets very noisy and attracts a disruptive crowd on Friday and Saturday nights. Andrews Terrace is also frequently visited by ambulances due to the infirmaries of the many elderly tenants, and there were issues with people setting off the smoke alarms by using the stoves improperly, which often brought the fire department. The flashing lights exasperated her epilepsy until she was able to move to a unit in the back, which was a huge improvement. So overall, it sounds like Andrews Terrace has both positives and negatives. —EileenF