Barnes & Noble College Booksellers is a separate subsidiary from Barnes & Noble corporate. It was originally a different company but B&N chairman Leonard Riggio had a controlling interest in it and was its chairman. B&N subsequently acquired it in 2009. Today they operate bookstores at more than 770 colleges and universities across the United States, selling textbooks, school memorabilia, dorm supplies, and general reading material.

As Barnes & Noble College is pretty much its own entity, most locations do not accept B&N membership discounts or coupons. 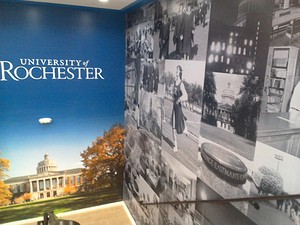 Stairway at the College Town location.

The University of Rochester Official Bookstore at College Town was originally two separate stores: one on the River Campus in Douglass Dining Hall and the other in the Medical Center at Mt. Hope/Elmwood for the medical and nursing students.

In 2014 these were combined into a single two-story shop. It is 20,000 square feet and serves as College Town's anchor. It is also one of only two bookstores in the city that sell new books for the general public. Like the RIT location, they accept B&N membership discounts (but not coupons) for all merchandise except textbooks. They also take URos as payment.

The University of Rochester Official Bookstore also hosts both regular and special events. Check their Facebook page or the College Town website for more information. 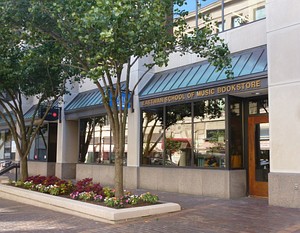 This tiny shop is located in downtown’s East End neighborhood, in the Eastman Place building across the street from Java's and the Eastman Theater.

2009-11-06 11:49:04   Although I had reservations initially about RIT outsourcing their bookstore to Barnes & Noble, I'm impressed with the result. The RIT merchandise selection has expanded significantly, and the Starbucks cafe is cozy, and a great spot to have a drink and flip through a book or magazine before you buy. —AlexanderGartley

2016-11-06 14:09:56   Move Sayari Creations to the empty storefront on the left so the Eastman store can expand and be a bookstore for downtown in general, similar to the College Town location. —EileenF