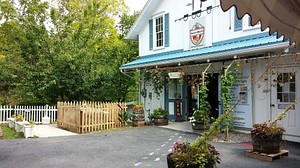 Brew & Brats at Arbor Hill is a bar and restaurant at Arbor Hill. They focus on the local historical significance and enjoyment of hops, an integral ingredient of beer. The towns of Bristol and South Bristol were noted for their hop production, most of which supplied the McKechnie Brewery of Canandaigua in the late 1800s and early 1900s.

Arbor Hill partnered with Artisan Meats from Canandaigua to produce their brats. The sausage is made with Arbor Hill

Sherried Wine BBQ Sauce, which has been a staple at Arbor Hill almost since the winery opened in 1987. The original formulation was developed by Neapolitans Darryl Braun and Doug Preston.

There is live music on Fridays and Saturdays from 6pm to 9pm. A special events calendar is maintained on their