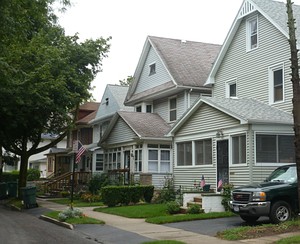 Houses on nearby Barton Street, many of them student-occupied.

Brooks Landing is located at the intersection of Brooks Avenue and Genesee Street in the 19th Ward (on the border of the PLEX and Genesee-Jefferson neighborhoods), across the Genesee River from the University of Rochester. It was given a face lift via UR's recent Brooks Landing Project. It includes several apartment-style student dormitories, a hotel, and a series of storefronts.

Information about the history of the neighborhood is available

A pedestrian bridge linking Brooks Landing and the UR River Campus opened in 1991.