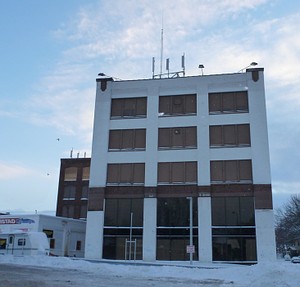 The Button Lofts refers to three former industrial buildings in the Monroe Village neighborhood that have been rehabbed into townhouses, loft apartments, and retail space. The developer is

The buildings are located on separate but contiguous parcels: 330 Rutgers, 340 Rutgers, and 795 Monroe. The project was completed in December 2014. 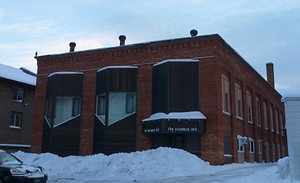 795 Monroe Avenue (Dec. 2013), modified in the 1980s with two-sided bays over the windows in order to resemble a movie marquee.

The name derives from the complex's original function as Shantz Button Factory. It was placed on the National Register of Historic Places due to the importance of the button industry in Rochester's history as a manufacturing boomtown:

In the late nineteenth and early twentieth centuries, the button industry developed in parallel with the men’s clothing industry in Rochester and the two played an important role in Rochester’s growth as a specialty industrial center with a reputation for high quality manufacturing. Beginning with tailors who cut cloth to patterns and employed garment workers to assemble clothing in their own homes, the industry expanded rapidly after the introduction of sewing machines and other technological improvements in the 1850s and later decades. 12 Clothing makers were among the city’s top industries in the late-nineteenth and early-twentieth centuries in terms of employment and total wages and the industry was one of several in which local firms sought to compete on quality more than price, adopting the motto “Rochester Made Means Quality.” While the clothing industry was at times overshadowed by the women’s shoe manufacturers and later by city’s photographic and optical industries, it employed great numbers of Rochesterians, including women and immigrants, and was an innovator in the practice of developing nationwide business through sales agents in other cities. With the growth of the clothing industry, Rochester seemed like a natural site for the manufacture of buttons and there is some evidence of an unsuccessful attempt to establish a button business in the city in the early 1880s.13 However, it was not until 1887 that an experienced button maker, Moses B. Shantz, set up shop in the community, establishing the city’s first successful button making business.

They go on to describe the architecture:

In addition to being one of Rochester’s [two] surviving button factories, Shantz is distinctive in illustrating a vernacular form of industrial architecture and showing the evolution of the vernacular during the first two decades of the twentieth century. The Shantz plant uses the mill construction techniques and design vocabulary common to industrial buildings of the late nineteenth century, although the large paired windows in the original five-story 1904 block reflect the early-twentieth century trend toward introducing more light and air into factory spaces. The four components of the Shantz Factory include the original 1904 five-story block, the 1905 east building, the 1916 one-story building and the 1920 five-story north wing of the 1905 building. The buildings offer an instructive view of the changing norms in the construction of factory buildings while still holding together as a coherent complex through the common use of brick facades, decorative brick cornices, flat roofs and large windows.

A small part of the original property that had once been a front lawn is now Temstad Services Station and a Hess.

Other businesses located here in the past have been Ted Cohen's Office Furniture and Pop's Corn & Concession Supplies.