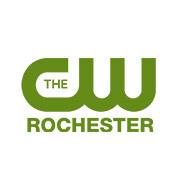 CW-WHAM is the branding of a digital television station operating out of Rochester. The station, owned by Deerfield Media, carries programming from The CW Television Network. The station is seen on the DT2 subchannel of ABC affiliate WHAM TV-13, as well as on channel 16 on most basic cable systems in the Rochester area and a digital/HDTV feed on channel 1016 for digital subscribers.

The station was originally launched in 2000 as WRWB, a cable-only affiliate of The WB provided by Time Warner Cable. This lasted until September 17, 2006, when that network closed as part of The CW's formation. WRWB's CW affiliation was officially announced on March 7, 2006. [1] Time Warner owns The CW along with CBS Corporation. With the switch, the station's on-air identity changed from Rochester's WB 16 to Rochester's CW (with a TV16 logo used to denote its cable channel) and the WRWB calls were laid aside.

On November 13, 2006 WHAM-TV took over Rochester's CW from Time Warner Cable, renamed the station CW-WHAM and added a new digital feed on WHAM's 13.2 subchannel. The station also moved its operations to the WHAM-TV facilities on West Henrietta Road. However, the station continues to air on Time Warner Cable's Channel 16.

On November 16, 2006, not long after it took over CW-WHAM, Clear Channel announced its intention to sell off all of its television stations, including CW-WHAM's parent station WHAM-TV, after the company was bought by private equity firms.

On January 15, 2007, WHAM-TV began producing a four-hour, 5-9 AM morning newscast for CW-WHAM. WHAM itself simulcasts the first two hours of that newscast.

On April 20, 2007, Clear Channel entered into an agreement to sell its entire television stations group to Providence Equity Partners.[2]

Not soon after the announcement of a new owner. WHAM-TV began referring to their CW station as "CW 16" and CW Rochester as opposed to "CW WHAM".

On September 8, 2007, CW-WHAM begun airing Next Era Wrestling's Superstars of Wrestling, a popular wrestling program filmed and produced locally for the Rochester audience.