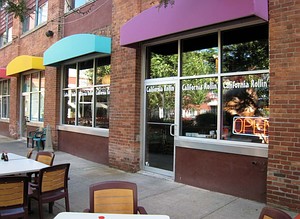 Entrance off the Village Gate courtyard, 8-2008

California Rollin is a restaurant serving Japanese food. Their original location is the Village Gate in the Neighborhood of the Arts, while their second location is in the Port of Rochester in Charlotte known as California Rollin II; the two locations are under separate ownership.

As the name suggests, they serve American West Coast-ish sushi, much of which is named after places and things in Rochester (South Wedge Roll anyone?)

There was at one point a third location in Brooks Landing that opened in March of 2013 but closed in December.