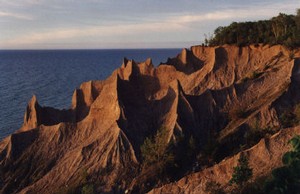 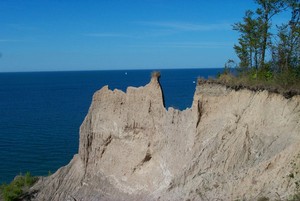 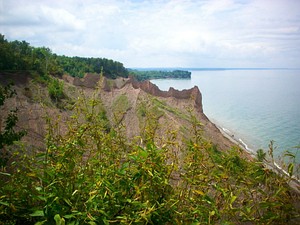 At Chimney Bluffs State Park land and water clash, sculpting the most dramatic landscape on the Lake Ontario shore. You can experience massive earthen spires from above or along the lakeshore on nature trails. Day-use services include picnic areas, nature trails and restrooms.The buffs are composed of soft clay and mud, formed by erosion of a glacial drumlin.

The park is on the east side of Sodus Bay and convenient for day trips to Sodus Point and the park.

Chimney Bluffs in the News

There's also a "hidden" ledge that overlooks almost the entire park. It appears that David Howe found it, from the photo above, but the other direction is a spectacular view all the way down to Sodus Bay. —DevinRosenbauer