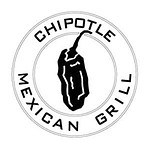 AKA Chipotle (see revisions there).

2009-07-22 11:20:11   Back home when Chipotle hit campus within 6 months all the Taco Bell locations nearby had shut their doors. Within 3 years there were 16 Chipotle locations all over the city and Taco Bell was down to a few token locations in food courts of shopping malls. This is a good thing! —LukeAnderson

2009-08-13 18:19:29   Have been to locations in other cities and really liked it. Went to the Rochester one recently and it was VERY crowded. I suppose I should have expected it, but... a line out the door for a burrito when there's a perfectly good nearly identical burrito place down the road (Moe's, not to mention Taco Bell or the 'authentic mexican' place in the Holiday Inn)? This will probably die down in a month's time. The carnitas definitely tasted good, very pork-y. I wish they had more variety of toppings like Moes... I totally missed fresh jalapenos. There's some indoor and outdoor seating available. Give it a try when you're shopping near the mall - just remember, Chipotle burritos are giant logs of food, and you will be stuffed! —MRich

2009-08-30 21:56:10   Wife and I ate here this evening. We're not hardcore Mexican food junkies but we like it occassionally. Both had the Chicken Burrito's. VERY GOOD! Not a very big waiting area. Winter-weather Mexican food lovers may freeze if it's busy —PeteB

2009-09-12 15:00:34   Three members of my family have dined here, all at separate times, and our opinions are unanimous: better than Taco Bell but that's about it. I had a chicken burrito, I thought the chicken was well seasoned but the rice was just bland filler, the chips were generic and the salsas rather plain. If I want quick Mexican, Moes is the place for me. I wonder how well they'll do once the novelty wears off. —TomMaszerowski

2009-10-02 11:51:31   Been here twice for the burrito and really enjoyed it. I would have liked some free chips and salsa to seal the deal, but that's nitpicking. I disagree about the rice- it is what it is- rice, first and foremost. You get enough flavor from the salsas and seasonings rubbed on the meat. Everything seems fresh and simple behind the counter- a guy grilling in the back, a guy making rice, and someone else chopping up veggies. I much prefer this place to Moe's. —JohnBarry

2009-10-28 19:39:11   I'd like to try this place but the line is always out of the door. Either the food is very good or sheeple keep herding there because it's been said that the place is very good. Either way, I'm looking forward to trying it out! —BatGuano

2009-10-29 06:05:22   Flavors and quality of the ingredients are excellent, but prices are kind of high. You don't get free chips & salsa like Moe's. Guacamole is considered a meat here, so don't plan on adding it to your burrito without upping the price significantly. —NathanHenderson

2009-12-01 20:16:34   The hype surrounding this place has been out of this world. So I walked in skeptical yet ready to be blown away. I wasn't blown away. I've had the same burrito at several other places and the Chipotle version doesn't do anything to differentiate itself from the crowd. Don't get me wrong, though, the food is good but I'm not going to go out of my way to return. I've said it before and I'll say it again: If I want a burrito like the one Chipotle serves, I'll go to Sol Burrito. —BatGuano

2009-12-14 22:05:20   I couldn't even finish my meal. There menu was very limited and honestly confusing. Very little creativity to there dishes. —MartinWright

2010-02-09 21:56:15   I really like the barbacoa and lime cilantro rice. I wish they had more options for fillings though (like fresh jalapenos or chopped red onion). —OneLove

2010-02-27 11:58:27   I've heard all the hype about how great it was and lines out the door, so I figured I'd finally get around to trying it out. Line moved very quickly. There were around 6 employees making food, one for the shell, one for the meat, one for the rice, etc. Unfortunately, the efficient assembly line left a restaurant with several seatless people. The portions weren't bad, although I found the food to be very salty, not sure if it was the meat or salsa. Ordered a side of chips and salsa, there was about an inch of salt in the bottom of the bag, and you just about had to scrape it off of the chips. Personally, I prefer Moe's, but I'm also in the search for a non-chain burrito (Buffalo natives: think Burrito Bay, or the late Edritos). —Ackj

2010-03-28 20:34:16   I cannot begin to mention how horrible this place is. I went to the Jefferson road location. First off, let me preface this by saying I've been going to Chipotle for 12 years now, in real cities like DC and NYC. These locations had generous portions and quick service - neither of which are found at the Jefferson Road location. The line was out the door, the people preparing the food were slower than dirt (they didn't even have extra shells ready to go), they skimped on the servings (about 2/3 what I've come to expect from Chipotle), and the chips were stale. Do yourself a favor and go to El Conquistadore around the corner, or hit up John's Tex Mex, where you get more, better food for less money - the only reason we even went to this was because John's is closed on Sundays. —MarcusKroll

2010-04-02 20:07:31   The burritos are tastier than Moes, but cannot compare to QDoba (which sadly has not ventured into Western NY). My biggest complaint is that there is not enough seating available. I am not sure why seating is so limited - perhaps because they want to give the restaurant a sense of always being packed or maybe because the constant table turnover means they never have to clean the them. The last time I was in, I watched the boyfriend of one of the workers eat a pizza and later sleep at one of the tables while actual customers had no place to sit. Yuck —ChristineH

2011-02-02 16:11:00   I know it's considered a "fast casual" restaurant, but the quality of the food here is unmatchable by local Mexican restaurants. There's a reason they are expanding constantly. They've found a way to use fresh ingredients and make the best tasting food for a "fast food" price. There are times I visit a local Mexican restaurant that is much more expensive and I ask myself, "Is the food here better than Chipotle's?". The answer is usually, "No." —ytbh