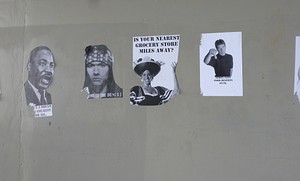 (This was taken in PLEX, but you get the idea.) 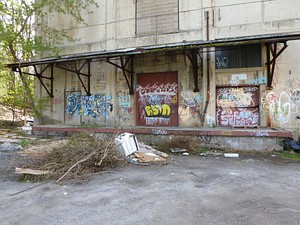 PLEX again. That neighborhood has had similar issues, although it's improving. This abandoned building, located adjacent to a brownfield, was long the site of illegal dumping. The Crescent of Poverty a.k.a. the "Fatal Crescent" refers to five neighborhoods clustered around the northern border of Rochester's downtown. They are Upper Falls, Marketview Heights, and parts of Group 14621 to the east, and Edgerton, Brown Square, and JOSANA to the west.

The north side has a rich history as the site of the oldest settlements that were incorporated as Rochesterville in 1817. The city has always been a magnet for immigrants, especially during its boomtown era as a manufacturer of flour, clothing, and cameras. They were joined by an influx of African-Americans seeking greater opportunities during the

Great Migration of the twentieth century. Today, the Crescent of Poverty represents the city's highest proportion of black, Latino, and immigrant residents. Most of the latter hail from Africa, Asia, and Latin America.

The dawn of the twenty-first century saw a massive restructuring of Rochester's economy, characterized most dramatically by a loss in manufacturing jobs, particularly at Eastman Kodak. The great industries were supplanted by healthcare, higher education (the University of Rochester is now the city's largest employer), the service sector, and small technological start-ups, a development that, while in many ways both inevitable and beneficial, nevertheless hit the city's poorest residents hard. It is difficult to find jobs that match their skill set and many report lower wages as a result. By the late 2000s, the median income in the Crescent was only $17,600 versus $44,300 for the Rochester metropolitan statistical area as a whole.1 According to a 2010 market study, the median family income of JOSANA was only $20,800 with a per capita income of $9,250.2 Now, in 2015, Rochester has more people living at less than half the federal poverty level than any other American city of comparable size, with 16.2% of its people living in extreme poverty. For a family of four, this is defined as surviving on less than $11,925 a year. According to measurements used, the census data from 2011 to 2013 reveals that the poverty problem has either remained steady or gotten worse.3

45% of Crescent residents lacked a high school diploma in 2004, further hindering their ability to acquire the new skills necessary for a new economy.4 The struggles of the Rochester City School District are many and well-known and need not be reiterated here.

Insecurity in employment, moving from one low-wage job to another as they become available, creates a transient population and a loss of stability for children. Most people are subsequently renters rather than homeowners, and vacant properties are numerous enough to attract criminals such as drug dealers, who like to use empty houses for trafficking purposes.5 In fact, another nickname for the Crescent of Poverty is the Fatal Crescent (an ironic play on the term

Fertile Crescent), as it is the site of the vast majority of Rochester's shootings and murders. "Most people say 'Of course' when they hear a murder has taken place on Conkey and Clifford Avenues, or Joseph and Hudson Avenues," says one local blogger. "THAT’S where they are supposedto [sic] happen."6 Despite the apathy of richer, safer neighborhoods to yet another misfortune in the Fatal Crescent, the frequency of violent crime there hurts Rochester as a whole, making it difficult to attract homeowners and investors to what they perceive to be a dangerous city.7 8

The Fatal Crescent has yet another, less visible facet as well. In September 2012 it was reported that, thanks to Rochester, Monroe County has the highest rate of infant mortality in New York State. According to the Democrat & Chronicle, "Experts and advocates say the barriers to access include transportation, inflexible working hours, mistrust of doctors and apathy toward preventative medical care." The young age of the Fatal Crescent's mothers is another factor, with many unprepared emotionally or financially to handle pregnancy and childbirth.9 Survivors often fare little better. September 2012 also witnessed the announcement that Rochester was number seven in the country - not in New York State, but in the United Sates - for child poverty.10 As of 2015, Rochester is the only mid-sized city in the country where slightly more than half its children live in poverty. Only Detroit, Cleveland, and Dayton, OH have higher child poverty rates.11

Poverty, diminished spending power, the palpable threat of crime, and neighborhood instability have also deprived many communities of a viable commercial district, leaving people who cannot afford cars with no amenities within walking or biking distance. Parts of the Crescent have since become

food_deserts. Unsafe streets and a lack of access to good food also lead to higher rates of obesity and other related health problems, further compounded by the proximity of many residential areas to industrial parks. Meanwhile, cheap rental homes run by absentee landlords have notorious problems with lead.12 As of 2015, 29% of children under six in JOSANA tested in the very high range for lead poisoning.13

Still, for all its struggles, the Crescent of Poverty does have potential in its strong neighborhood associations, job-training partnerships between the county and local colleges, and a variety of historical institutions that have survived the upheaval of decades. Located in Crescent neighborhoods are the Public Market, the

Frederick_Law_Olmstead, the Genesee Brewing Company, and, like much of Rochester, some wonderful vintage architecture.14 Flower City Habitat for Humanity has been active in JOSANA, while revitalization plans are in the works for other troubled areas. While the future may look discouraging, one can always point to other success stories like the South Wedge and the Neighborhood of the Arts, both of which today would be barely recognizable to a time-traveler from as recently as the 1990s.