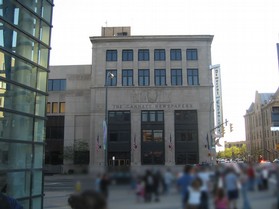 Gannett Building, May 2007, photo by DavidHowe

The Democrat & Chronicle (D&C) is Rochester's main daily newspaper and traces its roots back to 1833. The paper was once the flagship of the Gannett Corporation, which moved its headquarters from Rochester to Arlington, VA in the 1980s and its flagship is now USA Today.

Like many papers, the D&C currently faces a drop in circulation, but it has remained in its relative position (60-70) as one of the top 100 daily newspapers in the US.

Other publications related to the D&C are the glossy Rochester Magazine, and Her Rochester for women.

The earliest history goes back to 1833, to a paper called 'The Balance' It's name later changed to the 'Daily Democrat' around 1840. That paper then merged with another local paper, 'Chronicle' in 1879, and was renamed the Democrat and Chronicle.

The paper was closely identified with the Whigs and then the Republican Party. That changed for a time as

Frank Gannett bought the paper as a morning alternative to his own Rochester Times-Union in 1928 and soon thereafter threw its support to FDR. The editorial slant returned to the Republican point of view soon afterward until Gannett's death in 1957, at which time it moved to a non-partisan stance. There has been some criticism that the paper has been too tough on Republicans in the post-Watergate era.

Though Gannett moved its corporate headquarters from Rochester to Arlington, Va., in 1985, decisions about the Rochester operation continue to be made locally.

Editorial operations were combined with the Times-Union in 1992, leading to the shuttering of the evening paper in 1997, the same year that new color presses were opened at Canal Ponds office park in Greece.

A renovation of the main newsgathering and business offices on Exchange Boulevard was completed in early 2006.

A standing dispute between the D&C and its unions, who had been working without contract for more than 13 years was resolved in 2008.

In 2013 the D&C announced that it would be building a new editorial/business office near the intersection of Main and Clinton.

Please visit the Talk page for older discussions on the topic.


2007-11-30 18:48:52   The D & C is one of Rochester's most embarrassing attributes. As a non-native, it's one of the things I hate most about Rochester. Compares very unfavorably to the Buffalo News, which Buffalonians love to hate. I don't blame the staff, I blame management. —JasonHaremza

2008-09-06 12:06:59   I find the basic quality of the news reporting to be relatively acceptable... I just like a quick summary of what's going on locally, and unlike rnews.com and the other local TV sites, the D&C seems to believe in proofreading. However, wow, the website comments are abysmal. It ruins the experience for me. Don't get me wrong — I normally enjoy comments on websites, but somehow, the D&C attracts more than its fair share of idiots, morons, mouth-breathers, knuckle-draggers, and Budweiser-swillers.

Fortunately, I have free academic access to a paid version that has the comments moved to a separate page; curiously, it's paper-based, only updated once per day, and very fragmented (continued on page 9?! why?!). Plus, most of it seems to be a cross between a really bad recipes site, a non-searchable Craigslist, Yahoo Answers, and the Pennysaver. Some things benefit from a print version — I'd probably subscribe to 4Chan Monthly, just to avoid too much /b/ — but I'm not sure local news does. —RyanTucker

2009-12-19 11:06:15   90% of the D&C consists of ads, 8% consists of stories pulled from the AP/Reuters newswires and the other 2% are written by actual Rochester journalists. And their Internet presence is embarrassing for a metro newspaper of a city that is as sophisticated as Rochester. —BatGuano

2012-02-18 13:38:59   Discussion/comment sections in D&C's online news articles have recently switched over to requiring FaceBook logins, and the general quality of comments has gotten substantially better. —Bammerburn

2012-06-18 15:49:34   Since I moved here, I have enjoyed getting the paper. It does its job of keeping me inform of news and also gives me some good information on events I almost forget about coming up. —bonnev659

2014-02-02 19:10:23   Nobody wants to see them build their new building at the corner of Main and Clinton. That would be STEALING prime development real estate from somebody who could actually help build a healthy urban streetscape. Unless they plan on rethinking their project to be taller and more mixed use, they can keep their headquarters in the suburbs for all I care... —sub619