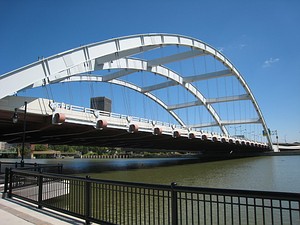 The Douglass-Anthony Bridge (sometimes called the "Freddie-Sue Bridge" 1) is the bridge built between 2004 and 2007 to replace the old Troup-Howell Bridge. Its full name is the Frederick Douglass-Susan B. Anthony Memorial Bridge and was so designated following the completion of construction. Most folks probably still use the old name.

The bridge has received numerous awards, including national recognition from the Federal Highway Administration for its design in March 2009.