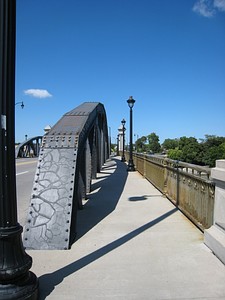 The Ford Street Bridge, first built in 1840 as a wood structure and later rebuilt (around 1919?) as a truss bridge is composed of connected steel elements in the fashion of a "pony truss". This style truss carries its roadbed in the middle of the truss where the sides extend above the roadbed but are not connected.

Recently renovated, the Ford Street Bridge won an award from the people who helped to restore it, the

Western New York Landmark Society. The award, "The Award of Merit", was given for everyone involved willingness to restore the bridges appearance to its original design. Brilliantly it once again features four concrete pylons topped with large light globes.