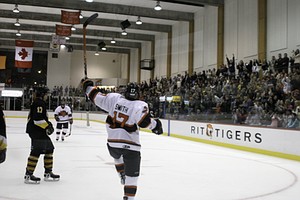 The Frank Ritter Memorial Ice Arena is an ice skating rink/hockey arena located on the Rochester Institute of Technology campus. It is the former home of the RIT Tigers Hockey team and the

The official capacity of the arena is 2,100, making it the third largest ice arena in the

Atlantic Hockey Association in seating capacity. It includes a concession stand, a press box and the President's Box. The ice surface measures 85' x 185'.

The arena was opened in 1968 when RIT moved from its downtown campus. It is named for nineteenth-century RIT benefactor (Frank Ritter), who helped found the Mechanics Institute at the college. Ritter's grandson Frank Ritter Shumway also founded the Genesee Figure Skating Club.