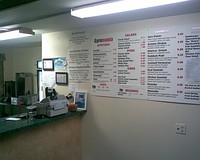 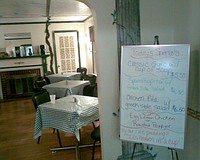 Gyromania was a restaurant located on Bay Road in Webster, serving up Greek specialties alongside American classics. Located across the road from Flaherty's Three Flags. Gyromania was run by the former owner of MT Bellies. They also offered catering.

Don't forget to ask about their daily specials!

"Bringing Greek Cuisine To the Next Level"

2007-12-09 01:48:51   We enjoyed our lunch here. We had the classic gyros and lemon potatoes...very tasty. The baklava was also very good. Waitstaff is friendly and the restaurant is very cozy. We'll be back. —RocDiner

2008-10-23 12:49:09   Gyromania is one of the best restaurants in Webster. I have never had a disappointing meal here. The staff are friendly and attentive. The soups are always excellent. I love the hummus! Gyromania is also very affordable for those on a budget. —KimBee

I've eaten here 3 times, and each time I come in, the food is just a bit blander than the last time. Today, I had the egg drop chicken soup and a gyro. The soup was bland to almost being tasteless, and the tzaziki sauce on the gyro tasted like it was nothing more than greek yogurt mixed with mayo! This place may just make the WORST gyro on the planet.

I mis the days when you could get a good gyro in any of the numerous local greek-owned diners. As those diners disappear, they get replaced with bland chain restaurants. I was hoping that at least THIS place would make a decent gyro, but it seems that is not the case. On top of that, the place has hard seats and a crowded parking lot. I can't imagine ever wanting to try it again-3 times was enough. Even Jines makes a better gyro!