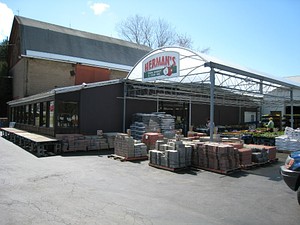 Herman's Market Outside - April 2008 Herman's Farm Market is a well-stocked farm market just 0.7 miles north on Five Mile Line Road from Route 104 in Webster. Always a nice selection of local fruits and veggies. Flowers when in season and basic garden stuff too like soil and mulch. Apple cider available pretty much year round. Always some baked goods including cookies, and pies, but the best time is the fall when they crank out the homemade fried cakes (donuts). Great place for your Halloween pumpkin.

Herman's is a recommended, pre-park stop to pick up "carry-in" for a number of Webster parks and attractions.