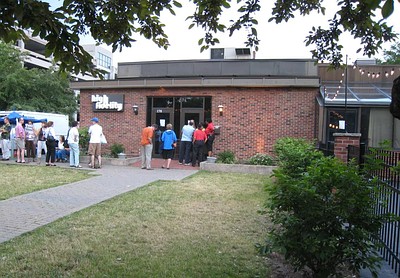 High Fidelity is a bar featuring live music, both local and national acts. There's a light bar menu and the occasional open mic night. Also, every second and fourth Wednesday of the month, High Fidelity features the Comedy Block Party.

Until the early 1990s Milestones was a block east on East Avenue, but its original location was torn down to build the courthouse on the corner of East and Chestnut Street. At the old location it had originally been called "Jazzberry's", but the present owner, Michael O'Leary, changed the name shortly before moving to the present location at East and Scio Street. The decor inside is basic black with remnants of its previous use as a diner/grill still in evidence, such as the greenhouse tacked onto the front of the building.

The live music at Milestones is an eclectic mixture of good-time rock and roll (including cover bands), jam bands, singer-songwriters, Celtic, and roots music, with a smattering of blues and jazz. Because the listening audience in Rochester tends to be conservative and a little blinkered in its musical taste, this venue may be the smallest place you ever see some quite famous people. And you may even get to sit down and have a decent beer while you do it.

http://www.rochester-citynews.com/gyrobase/Content?oid=oid%3A5082). According to The City's article, Gizzie intends to maintain the original live music format, but will be changing the club's name to High Fidelity following renovations.

One reviewer discusses the new website: "The web site is considerably less useful than its previous incarnation. It automatically plays background music, a practice that is widely regarded as poor practice and which most amateur web pages gave up five years ago. This may be some ill-considered ironic joke, since the music played is a a tinkly piano and guitar number that would not sound out of place in a Barry Manilow revue. It is difficult to turn the music off, since there is no mute button but only a slider that takes several seconds to crank down the bottom. Along with this design decision, the entire site is a single flash piece, making it impossible to, for example, directly bookmark the site's show schedule— Milestone's old music calendar being a frequent denizen of Rochester bookmarks. While the site does have some new features, like a listing of the food menu, the utility of them is destroyed by confining the whole menu to a tiny, difficult-to-read little scrolling box."

2008-06-17 10:27:02   High Fidelity has potential but Joe Gizzie needs a better beer selection. The current selection appeals to simple tastes and low budgets. If thats what hes going for, then he has captured it. I dont find Labatt, Bud, and Heineken acceptable, so I wont be back. Plus when I asked the bartender if "that was it", she acted like a B!t@h and walked away. How can you offer that few beers and expect people to be content. —MrRochester