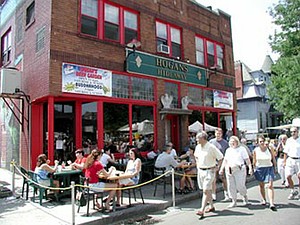 Hogan's Hideaway has been a fixture of Park Avenue for over twenty years. It began as a Family Restaurant. During that time, the restaurant underwent many expansions. For the most part, though, the concept remained the same: fresh food in generous portions. They served only fresh fish and fresh meats, baked their own bread, hand-made their own pasta, and offered up homemade desserts. Inside, Hogan's was known for its collection of fancy vintage hats and umbrellas.

After closing in November 2016, new owners have reopened as a gastropub under the same name with a new look and menu on May 31, 2017. The new owners also own The Blossom Road Pub and Roam Cafe. In addition the new owners made changes; the entrance has moved to Park Ave., the bar is now in the front room. A small cozy room above the eatery, which used to be rented as a studio apartment, contains a single 12-seat farm-style table, which issued for communal pairing dinners, private parties and meeting space. Hogan's Park Ave Ale, Pale Ale and Apricot Blonde is brewed by Custom BrewCrafters. There is also a seasonal brunch. They have indoor and outdoor seating.

2009-01-26 13:36:18   The first time I ordered a pastrami on rye sandwich and loved it. The second time I went in and ordered the same thing and it sucked indescribably. The third time I went in we walked out because we couldn't find anything on the menu worth ordering. Our server said "Is there something wrong?" I couldn't make anything polite up so I just said "We gotta go..." It seems like an overstylized diner with overpriced specials. There are places that knock my socks off every time and those are the places that will continue to get my hard earned greenbacks. —PersonFace

2009-02-12 17:22:33   A new guy bought the restaurant and then ruined it. The guy fired every employee that worked their (some people worked there for five or more years), except for a bartender their who is a a$$hol# to every customer. NONE of the food is being made fresh anymore. They fired the chefs and hired 7 dollar an hours people to microwave your soup. This is not the place it used to be. I went there two days ago because i used to like the food and the menu is changed. Do you want to pay 12 dollars for a grilled ham and cheese sandwich? I would skip this place and save your money. —kilnbaker

2009-02-18 21:34:40   I agree with Kiln on every point but one, and this is a major difference. He is quite right that Hogan's recent takeover has been a tragedy for the food quality of the establishment. However, he could not be more wrong about the bartender. He has always shown my friends and I the utmost courtesy and respect, consistently offering helpful drink suggestions and a quick hand to refresh the peanut bowl. He is in fact the only reason we go to Hogan's. His conversational prowess, expertise, and music selection keep this place on our radar despite the changes in ownership. We'll be going there for as long as he is tending bar. —JeffreyL

2009-03-21 08:17:18   Before I write this I have to admit I don't have terribly high standards just the standard that the restaurant has made for themselves with previous visits. I tell it how it is. I took 2 friends to eat at Hogans a few fridays ago for lunch. It was HORRIBLE!!!! I ordered something that I thought couldn't be screwed up, a Friday fish fry. It was so over cooked it was the color or burnt carmel and the fish had withered down into nothing but while flakes inside the beer batter. I ate the fries and went hungry rather than get a case of the shits and or my food altered. My girlfriend asked for alternatives to her side of white rice next to her scallops and the waitress acted like she was personally insulted with the request. The waitress couldn't even offer her a potato. WTF? So my gf requested a salad trying to keep it simple— waitress says "let me go ask" she returned with a house salad and just ads it on our bill and leaves the white rice in the kitchen. If we were paying for the rice at least bring it out and tell us not add it to the already over priced item on the lunch menu. So to top our visit off the person we were celebrating his retirement was served what looked like a plate that came out of nick tohoe's kitchen. For what was described as a great steak sandwich made steak-um look like a gourmet treat! I think Park Ave restaurants are taking the bad economy and turning it into an excuse to lower the quality of there food and up the prices. I will not be donating anymore of my hard earned $ to hogans any time soon! —LissaaW

2009-06-03 18:43:06   I had a great meal here the other night. The veggie burger was superb and the accompanying fries were delicious. The price was also very reasonable. My only complaint was that the waitress wasn't very friendly at all. She seemed annoyed to have to actually wait on a table. —mooster42000

2009-06-22 16:53:30   I've eaten here 4 times. The first 3 times were great and I had no complaints. The fourth (and final) time was Wednesday 6/17 for a late lunch. We were a group of 6, I had decided to bring my out of town relatives here to grab a quick bite to eat, knowing Hogan's is a fun, local place. There were only 3 other tables of guests in the whole place, yet the service was unbelievably slow. We had to wait a really long time to get our drinks, and again to place our order, and again to get our food, and yet again to get our dessert, and finally get the check. There was also a chunk of bread or something in one of the water glasses which practically ruined my appetite. It is extremely unfortunate that even though the food was decent, the service ruined our experience. —LaurenRogers

2009-06-24 11:01:45   Been going here for about 8 years. They have (had) a great chicken sandwich and an underrated cheeseburger. So last night I got my chicken sandwich with the honey dressing. Something was up because everything was different. Bread, honey dressing, sweet potato fries...heck..even noticed the pickle was different. The old bread was so good that the new bread just about killed the sandwich. Don't get me wrong, it wasn't bad, but it wasn't the predictable staple I've enjoyed for years. The Italian Wedding soup was forgettable. The peanut butter fudge pie was good, and seemed the same, so at least they've got that going for them. Service was decent but miss the old staff. —JohnBarry

2009-11-15 18:23:43   We came here once on Friday. We were told there was a 45 minute wait, so we left. Fair enough... We then made a reservation a couple weeks later. When we showed up on time, we were told we would have to wait 5 minutes. After 5 minutes, we were told "we have your table, we just have to get it ready". (This seems to have been a lie.) After another 10 or 15 minutes with no word or apology, we finally left (and had a nice meal down the street at Magnolia). The host wasn't really rude, but wasn't at all apologetic, and offered no explanation. We won't be coming back. —kong

2009-11-24 11:00:19   An update: Hogan's unceremoniously dumped our favorite bartender over the summer. When we went in (for the last time) we heard the news from his successor who laughed at the sad fate of our friend. What's the point of a neighborhood bar that treats its neighbors so poorly? —JeffreyL

2009-12-31 10:50:03   Was one of our favorites under the old ownership.Based on all the negative reviews since new owner we had not returned. Went this past weekend and must say was pleasently surprised. I thought we had the best service we have ever had there. While we didn't have anything fancy for dinner( burger for me salad for my wife) can't say I noticed any dropoff in quality. See no reason not to return. —almorinelli

2010-02-22 20:20:18   I visited Hogans Hideaway on or around February 14th for lunch. I was very pleased with the experience. The food was excellent. Their french onion soup is absolutely delicious. I shall be returning. —JoannaLicata

2010-08-11 13:38:42   I've been going to Hogan's Hideaway occasionally since 1988; great food and never a disappointment. I hadn't been for a few years but decided to go back, remembering their daily menu that always had something unique and appealing. Now the specials on the blackboard didn't even fill the board, whereas I remember them having so many that they could barely fit them. I decided on one and ordered it only to be told that they were out of that item. (it's a blackboard, right? erase it!). So I fell back to a pasta dish and while awaiting our server's return, that item was crossed off by a different server. So I chose an appetizer off the printed menu. After hearing that the appetizer I choose was no longer served and hadn't been served for months, I had enough; we left and went elsewhere. If they have what you order, you might be pleasantly surprised. —RichardSchreiber

2010-09-17 00:04:04   I have been a patron for the last twenty years. This place really used to be something special. The food is just terrible now and the specials are not special at all. Very disappointing and a tragic loss for Rochester. —PMazur

2010-10-03 21:05:35   I love, love, love, love, LOVE this place! Tons of vegan options, and they're super accommodating. My favorite menu item is the veggie melt sandwich with onion rings on the side (great onion rings, but their fries are great too). I will say, though, do not order the mushroom sandwich. It's horrible. Too many competing flavors. It's a sandwich with identity issues! Pics and more info on my blog review:

2010-11-28 21:33:17   Pretty good food. Was disappointed the first time as they were out of diet soda as well as the dish that i had planned on ordering. Service is not the best —HappyResident4

2012-02-19 17:13:01   One of my absolute favorite local restaurants. Even the simplest things on the menu taste like they were made with great care and thought. My whole family loves the place - I've never had a bad meal here. —TimCrist

2012-03-10 09:25:22   Very much a nook in the hole on Park. Usually great for any pasta dishes - they make their pasta from scratch and it definitely pays off because it's always delicious. Can't really recommend other dishes though - it's about the same as any other average meal you can get anywhere else, but their pastas are fantastic! —AGoldman

2013-07-29 16:47:40   I wrote a critical review of this place a few years ago, but I've been back a couple times since then. I've been pleased with the food both times I came here. Service was top notch as well. It's back in our rotation. —johnbarry