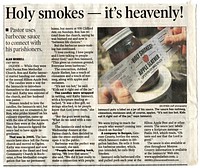 Member of the Spencerport Chamber of Commerce, and the "Pride of NY" Division of Agriculture and Markets Program.

UPDATE: 2008 Second Place winner (Vendor Class) of the ROCCITYRIBFEST, beating several local bbq restaurants. A 2009 Competitor in the Roccityribfest where they placed 25th of 62 in the New England BBQ Society (NEBS) Rib Contest and 11th of 42 in the Kasas City BBQ Society (KCBS)contest for Pulled Pork.