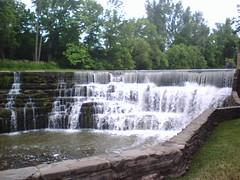 Honeoye Falls was founded in 1791 by Zebulon Norton. He built a grist mill, and later a saw mill, at a waterfall along Honeoye Creek. He originally purchased the 1,820 acres of land for only 12.5 cents per acre. The area was originally known as Norton Mills. In 1827, Hiram Finch built a second mill, called the Lower Mill.