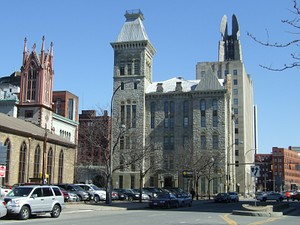 Irving Place served as Rochester's City Hall for over a century. It is often known as Old City Hall and is located in the City Hall Historic District. The building is bounded on three sides by West Broad, South Fitzhugh and the street Irving Place. It was listed in the National Register of Historic Places in 1974.

Irving Place was built using Lockport stone. The architecture is a combination of Romanesque and Ruskin Gothic styling. At the time of its construction, the Erie Canal ran through town where today Broad Street is (the subway runs in the old canal bed under this street). When Irving Place opened, the Broad Street entrance of the building opened directly onto the canal.

In the early 1970s Irving Place was bombed by Mafia members on Columbus Day in the infamous Columbus Day Bombings.