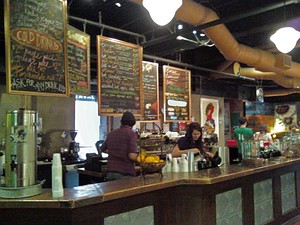 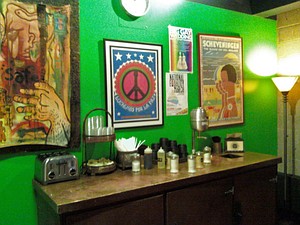 The artwork on the walls is all done by RIT students, faculty, and staff, and rotates periodically.

Java Wally's is a small cafe within RIT's Wallace Memorial Library. It was formed in partnership with Java's Cafe downtown in 2001.

Similar to its partner cafe, Java Wally's walls are adorned with artwork, in this case all done by students, faculty, and staff of RIT - see

Entertainment) by mostly acoustic acts. During New Student Orientation at RIT, there is usually someone playing every night.

The selection is also similar to Java's Cafe: coffee, tea, smoothies, and other drinks are served, as well as granola, cookies, and other light snacks.

Free Wifi is provided for the RIT community via "Wireless Wallace".

Payment methods accepted traditionally consisted of cash and Tiger Bucks only, however as of 2010 Java Wally's also accepts debit and credit card from all of the major credit dealers.