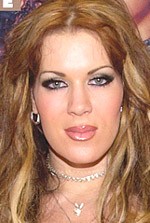 The Ninth Wonder of the World

Joanie Marie Laurer (December 27, 1969 -) is an American actress and retired professional wrestler who was born in Rochester, NY. A former bodybuilder, she is best known for her appearances with the World Wrestling Federation between 1997 and 2001, where she was known as Chyna. She is nicknamed "The Ninth Wonder of the World" (with the eighth wonder being wrestler

Joanie Laurer trained at Killer Kowalski's wrestling school in Salem, Massachusetts. She debuted in 1995 and worked for various independent promotions as Just Joanie and Joanie Lee. Her career reached new heights when she joined the World Wrestling Federation in 1997; she was called Chyna from then on.

Ms. Laurer was also recently seen on Season 4 of

The Surreal Life. She has been involved with previous WWF Wrestler