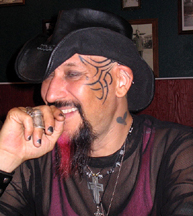 Johnny is an amazing person. He is loved. He will be remembered forever. — GaryPalmerJr

John has one child, Brittney B. Ipacs, who lives in New England — Brit's mother is Jeanette, and has since re-married and had two other children.
John was the "Mr Western New York Leather" titleholder one year.
John was one of the shortest-length members of the Rochester Rams, M.C. (three months).
John grew up in Seabreeze (in Irondequoit), a northern suburb of the City of Rochester, NY.
John's life was surrounded by music, drink and friends — just as he liked it.
John's favourite band was "The Smashing Pumpkins".

I digitized what photos John still had at the time of his death — which was far fewer than he used to have — a large box of photos were thrown out by his lover at the time during a fight. If you were someone that hung around John or Chaz, please contact me at ChazAntonelli@gmail.com if you want copies.

M.J. took Johnny in as her son when Johnny was a young teen and was kicked out of his biological family's home by his physically abusive father, John A. Ipacs, Sr. M.J. had several daughters from prior marriage. Two of these daughters lived with Johnny when he lived at M.J.'s — Josette (the youngest) and Kim.