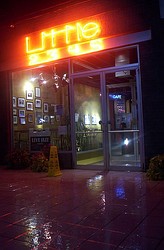 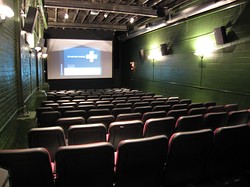 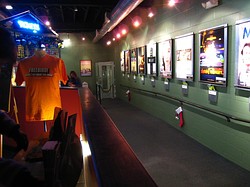 The Little Theatre (sometimes referred to as The Little Theater), located in the East End, is Rochester's best known (and many say best loved) venue for independent and art house movies, live music and art exhibits.

The original Little Theatre (Little #1) was the fifth cinema created in a small chain during the "little cinema movement," which was dedicated to showing "art films that appeal to the intelligent and sophisticated" in the 1920's. These theaters were built in response to the mass merchandising and the construction of huge 'movie palaces', which became popular in the 1920's.

In May 1982, William Coppard and John and Pam Blanpied bought the Little in order to refurbish it and bring it back to its former Art Deco glory. By 1996, the Little had grown to a complex of five theaters. The original Little faces East Avenue. The remaining four theaters are housed in a complex facing Winthrop Street immediately behind the original theater.

In 1999, The Little was granted 501(c)3 status as a not-for-profit organization under the name of The Little Theatre Film Society, Inc. A large part of the theatre's financial support comes from memberships, grants and donations. On December 19, 2011, it was announced that The Little would be merging with WXXI.

The theaters offer popcorn with real butter and treats from the Little Cafe. The cafe is housed in same building as the newer theaters, and presents live music, ranging from jazz to acoustic, five nights a week. The cafe is also home to monthly art exhibits showcasing some of Rochester's finest local artists. Admittance for music and art is generally free of charge.

They also offer fresh baked goods, coffee and Snapple. It provides a relaxed atmosphere and can be a nice "date night" for an alternative to the mall cinemas. The Little has been voted Rochester's BEST MOVIE THEATRE multiple times in City Newspaper's BEST OF ROCHESTER poll, as well as BEST PLACE FOR A FIRST DATE.

In the past The Little has run The Preferred Care Little Buddies Series, which offered a family friendly film and pre-show fun and educational event. It also has presented the Emerging Filmakers Series, a collection of short films by local and statewide filmmakers. There also have been series focused on documentaries. In recent years the Little #1 has been a venue for the Rochester International Jazz Festival. Recently the theatre has been showing classic films in 35mm once a month as part of it's Saturday Night Rewind series.

Zagster has a station across the street

Most outstanding theatre in town, hands down. —RochesterRed

2009-06-03 12:14:25   As a long time Little supporter, I've seen it go through a number of changes (new managers, renovations, 401k, etc.) as many Rochesterians have. I must say that their programming as of late has been rather disappointing. While this I'm sure has much to do with the current state of the economy and minions of Netflix subscribers, the little has inexplicably missed major independent and foreign premieres and has kept large studio films that are playing at numerous other locations for weeks on end. The Dryden, a film collection and restoration exhibition space, has probably shown more new films this year than the Little. This is disconcerting to me as a filmgoer — I know I'm sounding off here, but does anyone have any opinions they'd like to share? The Little is truly a special place and a treasure in Rochester, but one that I feel is losing its sense of purpose and unique identity... —RochesterGuy

2011-06-11 13:37:59   I am so thankful that Rochester has the little. While programming does go through its ups and downs I know that if i go see any film here it will be a quality film —heathersmith

2011-06-23 00:26:03   If I had to sum up my experience at the Little in one word, wonderful would be it. For some inexplicable reason I haven't made my way into this amazing theater in far too long. After a long streak of nothing but Regal and Cinemark outings watching a movie at the Little led to a truly refreshing night. First of all, their selection includes movies of a far higher caliber than mainstream cinemas. Secondly, their staff are the most friendly and courteous employees I've had the pleasure to run in to. Everything about this place is homely and comforting. Normally I probably wouldn't bother to write a review of a movie theater, but I'd love to see this place survive. Through being a faithful customer for as long as I'm in Rochester and spreading the word to others of this remarkable place, I hope to help it do just that. So next time you're thinking of going out for a movie, skip the crowds, the screaming children, the loud facades and atrocious atmosphere of chains and instead swing by the Little. I promise you'll not only enjoy the movie itself twice as much, but your whole night as well. —MrKates

2011-06-23 10:26:18   The movies they play haven't really interested me in a long time. They use to run movies from Japan that would get limit releases here in the states, but I haven't seen one in years. I usually find the Dryden runs more interesting films. Still the little is a nice place, just wish they'd shake up their offerings. —DamianKumor