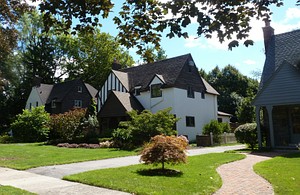 Meadowbrook is a neighborhood in Brighton. It was developed in the 1920s and '30s on what was then Buckland Farm, owned by the Kodak Employees Realty Corporation. Formed in 1931, the neighborhood association was one of the first of its kind in the country. It is still active, promoting the neighborhood, hosting several annual events, running a contractor referral service, and publishing a newsletter. The neighborhood has grown over the decades to include both contemporary and mid-century housing stock.

This neighborhood became somewhat infamous in 1951 when 15 of its homes were destroyed in the "Brighton Blast", killing two Meadowbrook children.

The Brighton Memorial Library is within walking distance, right outside Meadowbrook's borders.