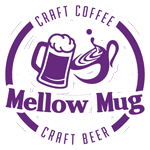 Mellow Mug was a coffeehouse and cafe at Bushnell's Basin that served Glen Edith and Finger Lakes brews. Pour-over and French press, as well as several seasonal drinks, including a Maple Latte made with real New York syrup. They carried craft beer and wine, and serve sandwiches, wraps, paninis, salads, and breakfast. The Roc Roll was basically the Garbage Plate in wrap form.