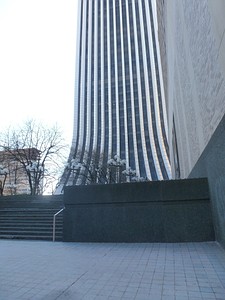 The name of the Midtown District derives from its heritage as Rochester's premier shopping district. Before the advent of suburban big box stores, the area was known for Sibley's, McCurdy's, B. Forman's, and Midtown Plaza.

Today, the Midtown District is in a state of transition. The demolition of Midtown Plaza in 2009 was the first stage of the city's

Midtown Rochester Rising plan which promises the rehabilitation of the nearly nine-acre site into a mixed-use development designed to attract a "critical mass of residents" and new 24/7 amenities. Windstream has moved staff to a new building on the site and the Democrat and Chronicle has moved their headquarters to a new building on Main Street attached to Windstream. A mixed-use project, called the

Tower280 at Midtown, is being carried out through a partnership between Buckingham Properties and Morgan Management, both local firms.

http://themetropolitanroc.com The Metropolitan also is a mixed-use project developed by

http://gallinadev.com Gallina Development with the first 16 floors being occupied by business's and floors 17 - 26 being developed as residential apartments. As of Jan 2019 floors 17-21 are available with more in development.

Until then, the Midtown District is characterized mostly by extensive construction. Another positive development was the completion of the RTS Transit Center in the St. Paul Quarter, which removed the bus congestion from East Main Street. The return of on-street parking has cleared the way for the revival of the Main St. East/North Clinton Avenue Retail District.

Neighborhood landmarks include the Liberty Pole, The Metropolitan, the Temple Building, and the Sibley Building. The neighborhood was previously known as Main and Clinton but was rechristened in 2013 in recognition of the importance of the Midtown site.