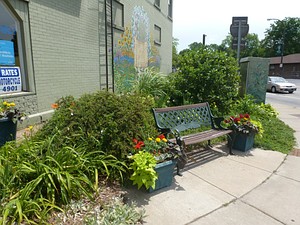 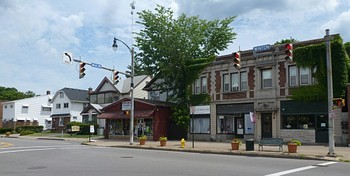 North Winton Village is a vibrant neighborhood with many well-kept residential streets and active commercial districts on North Winton Road, East Main Street, Merchants Road, and Culver Road. Most homes were built between the 1920s and the 1960s. Their architecture is very eclectic, including many American Foursquares, Cape Cods, bungalows, colonials, cottage-styles, split-levels, and ranches. The state streets are especially well-known for their eclectic naming sequence. Newer homes are available at the Newcroft Park subdivision. The area around Humboldt Street and Atlantic Avenue, meanwhile, is industrial.

The neighborhood is also known as

Culver-Winton-Main, especially when referring to the portions further away from North Winton itself. The area is notable for its socioeconomic diversity, ranging from the very affluent near Browncroft, more middle-class families in the center, and the generally low-income western outskirts.

The Park Avenue, East Avenue Historic District, Cobbs Hill neighborhoods are all within quick driving or biking, allowing residents to enjoy other trendy parts of town without the increased real estate prices. You can also walk into Irondequoit. The Village is close to the 490/590 split of the interstate loop, enabling quick, easy access to Brighton, Penfield, and Webster by car.

To the west of North Winton Village is the neighborhood of Beechwood.

Residential side streets. North Winton Village is served by the

North Winton Village Neighborhood Association, driven primarily by residents Mary Coffee and Marilyn Schutte. Association activities include coordinating with the City of Rochester on code and crime issues, maintaining community gardens (such as Linear Garden) and planters, beautification and eliminating graffiti, and generally advocating for the neighborhood. Leadership of the Browncroft Neighborhood Association often coordinates to resolve overlapping issues.

The NWVNA maintains a "Safety Center" at 1933 East Main Street. Various meetings are held there, most notably the neighborhood Code & Crime Issues meeting which occurs every Thursday from 11:30AM to roughly 12:30PM.

The NWVNA also operates some events annually to promote the neighborhood and local businesses. In December, local merchants stay open late on Merchant Open House night, offering discounts, samples, or snacks as incentive to shop and get to know the neighborhood. In the early autumn the Festival of the Arts (held in the parks near North Winton, Merchants Road and East Main) operates as a fundraiser for the Association in addition to building neighborly cohesion.

Because the overall North Winton Village covers such a large area, two mini-neighborhoods were defined, both with their own associations. Culver-Merchants, also called The Triangle, has organizations for both residents and business owners. The Pocket, meanwhile, is a tight-knit group of residential streets.

North Winton Village boasts a broad range of businesses and services within its borders, even compared to other desirable neighborhoods. Local options predominate, especially in drinking and dining, although there are a few retail and financial chains.

The proposed construction of an ALDI on North Winton, only a stone's throw from the East Ave Wegmans, has led to concerns among some residents of that immediate area becoming known for big-box grocery stores rather than diverse small businesses. This is currently (as of October 2015) a hot-button issue in the neighborhood, resulting in at least one public meeting full of shouting matches.