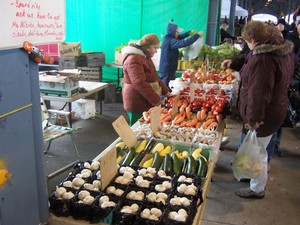 The Rochester Public Market is one of the cheapest places to shop in Rochester. It is a bit crowded, and you have to use your brain. Goods are very cheap, but there is a whole range of quality. Some vendors are selling backstock that has been sitting in a warehouse for two weeks, while others are selling vegetables that they picked the day before from their farm or backyard garden. Produce is generally very high quality and at very low prices. Many large bags/boxes of food can be bought for around $1 each. $10 could feed you for two weeks. You can regularly get fruits, vegetables, meats, fish, baked goods, cheeses, wines, spices and a variety of other food products at the market. Other vendors sell clothing, household goods, giftware, etc.

It should be noted that finding organic produce can be very difficult, although there is a good selection of organic meat and dairy products.

The Market District is located just northeast of downtown. Follow the signs. Be careful, the signs may be deceiving and send you in the wrong direction or unsuspectingly onto the Inner Loop. It is recommended to look up good directions before going. The neighborhood surrounding the Public Market is called Marketview Heights.

The market is open year-round, in all weather, so be prepared as much of the market is outdoors. Saturdays are the big day when everyone is there; Tuesdays are much lighter, and Thursdays are a happy medium. On Saturdays, parking is often a bit of an adventure, although new satellite lots on the West side of North Union Street have improved the situation in recent years. On Tuesdays and Thursdays, you'll probably be able to find a good spot inside the market grounds.

The public market has been in operation since 1827, making it one of the oldest continuously operating farmers' markets in the nation. It was originally located in what is now the downtown area, and extended over the Genesee River at the west end of the Main Street Bridge. It was then later relocated to the Center Market on the east side of the river between the Andrews Street Bridge and the Sister Cities Pedestrian Bridge. In 1905 it was once again relocated to what it is now its current location off of North Union Street in the Marketview Heights Neighborhood.

Be sure to check out Juan and Maria's Empanada Stop on Thursdays, Saturdays and for special events.

2016 Special Events "At the Market" Schedule

Community Garage Sales and Superfleas: Sundays, 8:00AM to 2:00PM:

Friends of the Public Market:

Zagster has a 2 stations there. 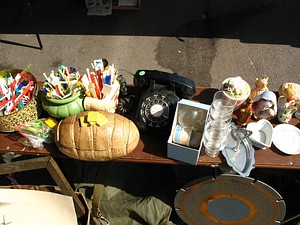 A variety of merchandise for sale at the Public Market. Photo by


You may make your Public Market comments and additions on one of the following pages: