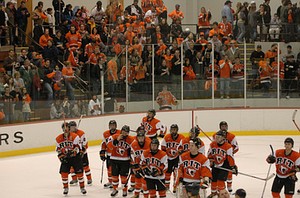 History
Until the autumn of 2005, Rochester was the largest media market in the nation without Division I NCAA athletics. This changed when RIT began its first Division I hockey season in October, 2005. A rough first season was highlighted with a win against nationally-ranked

St. Lawrence on October 28th, 2005. Despite a poor record, all games were hard fought by a team that largely was recruited to compete in Division III. The program quickly improved with RIT being the regular season champions in 2007, 2009, 2010, 2011, and an appearance in the Frozen Four in 2010. The head coach of the RIT Tigers is Wayne Wilson.

RIT is a member of the

Cornell_University, St. Lawrence, Bowling Green, and other regional rivals.
Since 2007 the annual Atlantic Hockey conference championships have been held on neutral ice at the Blue Cross Arena in Rochester - an event that annually draws thousands to the city. Rochester was chosen for its central geographic location in the conference, its facilities, and its hockey tradition.

Arena
RIT Hockey plays at the Gene Polisseni Center on campus. Opened for the 2014-15 season, this facility seats just over 4,000 fans for hockey and is among the best facilities in the conference. Amenities include a Club Lounge section, which features a buffet and cash bar, as well as seating behind the home player's bench. Multiple concession options are also available. Blue Cross Arena also serves as the venue for RIT's Brick City Homecoming game. The team's former arena, Frank Ritter Memorial Ice Arena, remains on campus and is used for public ice skating as well as intramural and High School sports.

Fans
The Tigers hockey team also enjoys the best fanbase in the conference, only rivaled in size by Army's. The student section at hockey games - the Corner Crew - is a large, loud sea of orange and black. The Corner Crew is situated in the corner opposite of the concession stands and the season ticket holder section. In 2011, the Corner Crew started a Pep Band section.