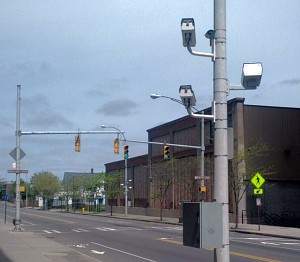 Red light camera system in-place at Bertina Forde's Crossing on St. Paul Street. Forde, a county employee, was struck and killed by a hit-and-run driver at the site in 2006. In late 2010, the City of Rochester undertook a program to monitor selected intersections with traffic cameras.

RedFlex Traffic Systems was selected as the vendor.

It is the City's stated intention to expand the program to the maximum 50 intersections allowed under New York State law. Up to 50 intersections may be monitored in any county having a population greater than 1 million (NYS Vehicle and Traffic Law § 1111-b).

A description of the system, and a list and map of monitored intersections, can be found

at the City's page for the program.

Alternative maps and data sources include:

2012-04-05 15:37:16   You can be fairly certain that it's NOT safety that they are concerned with; it's money. FWIW, during the debate leading up to the installation of the first camera, several studies from other cities showed that this is the case. In fact, the only thing that WAS certain was that the occurance of rear-end collisions at these intersections increases.

Now, if they could just put one of these things at the intersections of 390 and E. Henrietta, and at W. Henrietta, and give ticket to all those who 'block the box' every single day, maybe things would start moving better there..... —Alex-C

2012-06-22 08:16:03   I don't see why these are a big deal. You know where they are, and there is a flashing blue light on top of the poles that have them. Here's a thought on how to avoid tickets: DON'T RUN RED LIGHTS! No sh*t it's partly for money, but people who are dumb enough to get caught by these deserve to pay for it. If only we could come up with a camera that catches people texting and driving... —PDub

2012-06-22 10:37:55   Actually, the flashing blue lights are NOT for red-light cameras, they are for RPD surveillance cameras. The red light cameras only 'flash' when they take a picture of you in the process of losing a Franklin..... —alex-c