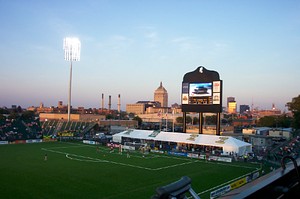 Vincent Monroe Rochester Community Sports Complex is the current name for a multiuse sports field and facilities owned by the City of Rochester. Built as a soccer stadium for the Rochester Rhinos (

USL), it has also played host to the former Rochester Rattlers (

WPS), and Rochester Lancers men's and women's soccer teams. It is located in the JOSANA Neighborhood.

The stadium opened on June 3, 2006 only a few blocks from the Rhinos' old home at Frontier Field and was built to serve the local teams and fans of sports played on a rectangular surface. Ample public financing from New York State made the construction of the then PAETEC Park very controversial, especially in light of the private ownership of the park. However, the former brownfield site in a struggling part of the city was briefly on the tax rolls (until the original owners defaulted and the city took over) and has hosted a number of events each year.

The stadium was for several years operated by the ownership of the Rhinos under a lease agreement. The decision of the Rhinos late in 2017 to suspend play for a year threw this agreement into question; after lengthy negotiations the arrangement was continued for 2018, without Rhinos games but with 4 USL matches (featuring Toronto FC II) and home games for the Rochester Lancers and Lady Lancers. The Rhino's lease was terminated at the end of 2018. The city Department of Recreation and Human Services began operating the facility for training and sports events in spring 2019; an indoor training facility (the "R-Training Center") opened in September 2021.

A new local club, the Flower City Union, will play their inaugural season in the soccer stadium in 2022.

On April 25, 2018 it was announced that the stadium would again be known as Marina Auto Stadium. Length and price of the arrangement were not disclosed, however by mid-2019 the stadium was being referred to in news stories as "the downtown stadium."

On February 10, 2011, it was announced that the new name of the stadium would be Sahlen's Stadium after the deal with Marina Auto expired. This was part of a multiyear naming rights agreement with Sahlen's Packing Company, Inc. of Buffalo, NY - owned by the same family that owned the WNY Flash. The cost of the agreement was not released, but was estimated at about $2 million.

Marina Auto Stadium (sometimes referred to as Marina Auto Park): At the halftime for the Rhinos' homeopener against the Montreal Impact, held May 30th, 2009, Marina Dodge was declared the winner in the naming rights pool of 328 entries. They chose the name Marina Auto Stadium which will remain the name for the entirety of the 2009 season.1. Marina had been a team sponsor since 1996 and purchased 25 of the 328 $1000 entries to win the name in 2009.2 Arrangements were later negotiated to extend the naming rights through 2010.