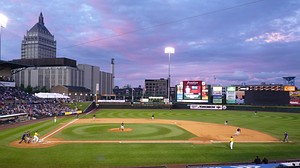 The Rochester Red Wings are Rochester's very own minor-league baseball team. They play their home games at Frontier Field. Since 2021 they have been the AAA affiliate of the Washington Nationals; they currently play in the 10-team East Division of the International League.

In a typical season Fireworks are set off after many night games!

If you go to a game, be sure to wave to the spectators on the roof of Buckingham Commons!

Professional baseball in Rochester can be traced to 1877. The Red Wings moniker dates to 1928, when the St. Louis Cardinals of the National League purchased the franchise and constructed Red Wing Stadium (later renamed to Silver Stadium) on Norton Street. From 1912 until 2019 the Rochester team played in the International League, which was replaced by the 20-team Triple-A East league in 2021. (There was no minor league play in 2020 due to the COVID-19 pandemic.) The International League name was revived in 2022.

The franchise averted disaster in 1956 when Morrie Silver led a community stock drive to purchase the club from the Cardinals, who intended to drop the franchise from their player development system. The affiliation between the clubs actually lasted until the start of the 1961 season when the Wings hooked up with the Baltimore Orioles, a relationship that lasted a remarkable 42 seasons until Rochester signed a player development agreement with the Minnesota Twins for 2003. This affiliation lasted through the 2020 season (although there was no minor league baseball that year).

For a more complete list of Red Wings Alumni check out the Alumni page.

The Red Wings hold the world record for

longest baseball game. In 1981 for playing a 33-inning game against the Pawtucket Red Sox in Rhode Island. The Redwings lost 3-2.

The Red Wings moved from Silver Stadium to Frontier Field in 1997.

2011-04-09 11:42:08   Out of all the things that have been done Downtown and failed miserably, Frontier Field is a shining example of what happens when something is done right. I love taking a game in here.. the location is perfect! —BatGuano

2011-08-01 09:49:12   I don't think I've ever been to a better minor league game than the one on Saturday, great fireworks and the mascot of funny. Good beer, but I'd skip on Red Wings Ale and for the Scotch Ale. I almost want to say this game is a fluke, since I've been to 3 or 4 games and this is the only one I can say was better than fair. But I only really get out to one a year. —DamianKumor