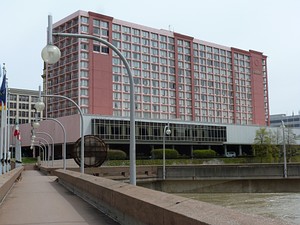 View from the Sister Cities Pedestrian Bridge in 2012.

The Hotel was convenient to former headquarter offices of Kodak, Xerox and Bausch and Lomb, as well as downtown attractions like the Blue Cross Arena, Frontier Field and Geva Theatre. The neighborhood is called the Convention District.

Christa Development Corp and Morgan Management, who also own and renovated the Strathallan Hotel and the Hyatt Regency Hotel purchased the building with plans to renovate. In 2018 they closed the Legends Sports Bar & Grille and opened Roc Burger on main.