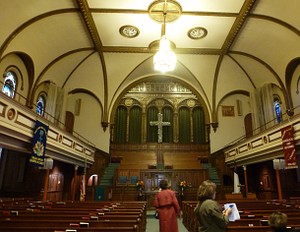 Sanctuary during the Landmark Society 2014 Inside Downtown tour.

Salem United Church of Christ is a beautiful historic church in the St. Paul Quarter. It was founded in 1873 by members of the Trinity Evangelical Church who wanted a location closer to Rochester's German immigrants. The building architect was Charles Coats and is known for its stained glass windows, which were installed between 1906 and 1909. Another prized feature is the Austin Opus 1160 organ with 42 ranked pipes, which is often played by students of the nearby Eastman School of Music.