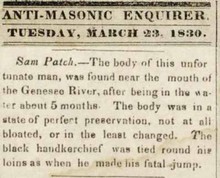 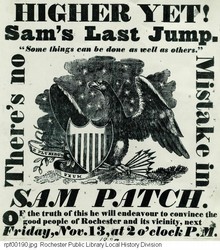 Copyright Rochester Public Library Sam Patch, who lived from 1799 to 1829, was a famous daredevil initially known for leaping from the Passaic Falls in New Jersey. Later, he became known as the first known survivor of the Niagara Falls. Some time after that, he came to Rochester to jump from our 98-foot High Falls of the Genesee River1. He did successfully, once. It was his second jump, however, that secured his name in local history. He jumped November 13th, 1829. It was a Friday. His body was found in Charlotte on St. Patrick's day of the following year (according to legend). 8,000 had gathered to watch on the day of his final jump 2. The Federal census record for the following year lists Rochester's population as 9,207 total.

His care-worn features, wild and fever-tinged

He traveled with a pet bear on a chain and a fox on a rope. Sam Patch could take any of you in a fight, without even trying. Allegedly, these were his final words:

And jump he did.

Today, a tourism boat in Pittsford is named after Sam Patch.