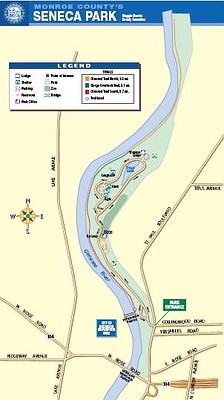 Seneca Park is an approximately 180-acre park adjacent to the Genesee River and includes the Seneca Park Zoo. It is located in the Group 14621 neighborhood.

Monroe County manages and maintains the park for the City of Rochester. The City Planning Commission declared the park a city landmark in 2002.

Seneca Park opened in 1893 as "North Park, this three-mile preserve of forested river gorge was renamed Seneca (which means “stone”). Another of

Frederick Law Olmsted's works of living art, Seneca Park features Trout Lake which was created by damming a natural spring. Swan boats, propelled by drivers who pedaled the boats like bicycles, carried visitors around the lake until 1922." 1