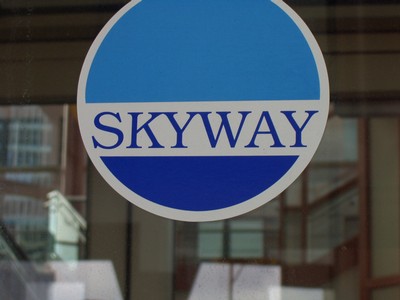 Skyway Logo at the entrance The Skyway is a network of elevated, covered walkways (and a few underground passages) downtown. It connects some of the buildings over five stories on the east side of the river, and it does not cross the river. Look up if you're near the Rochester Riverside Convention Center, or several other points downtown, and you'll see it crossing the street. The Skyway used to be more extensive when Midtown Plaza was still around.

Some parts are a bit chilly, probably in the upper 40s during winter. However, there's no snow or ice, and it's still warmer than outside.

The Skyway is a mix of different structures, so one part might be a tunnel over the street and the next a large foyer that spills out into several different directions. Don't panic! The small round blue signs will say "SKYWAY" with a white arrow on it, and there's a few kiosks sprinkled along the route.

Or print a map: