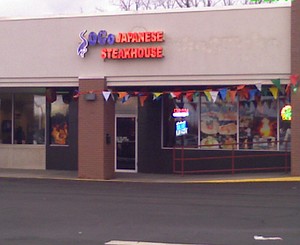 Sogo Japanese Steakhouse is a new steakhouse and hibachi restaurant in Webster. It's located in the Webster Plaza next to Breathe Yoga and Time Warner Cable.
It officially opened on January 29, 2011.


2011-03-09 18:55:02   We just tried Sogo, and were very pleasantly surprised! Toby at the sushi bar is a master, everything was unique and perfect. Even the ngiri beat everything else in Rochester - great flavors and not too much rice. The sweetheart roll is fantastic. We'll be back soon! —TD

2011-05-18 13:59:05   Just had a lunch hibachi here with my coworkers. It was a pretty so-so performance compared to my only other experience at Plum Garden. We were paying lunch prices and getting the lunch chef, so maybe they do a better show at night. The food was good, not great. They give you some serving sauces that are okay. Service is a bit slow, a coworker told me she had really slow service the Saturday before. I think they should put some spot lights on the grill since it's pretty dark in the back. —DamianKumor

2012-07-02 08:04:59   Went for dinner last night, which I think was our 3rd or 4th visit, and was very disappointed. The place wasn't crowded, but we had four different servers during the night. This resulted in a very disjointed experience. We were not offered the all you can eat sushi menu (other tables seated when we were, and afterwards, were) we were missing napkins and chopsticks for our appetizer, my entree came out a good 5 minutes before my dining companion's, and when clearing things away from our table, a fork fell off of a plate onto my lap. Food was okay, but the evening came off as though no one particularly cared we were there. I'll think twice about returning. —jbeez

2012-11-27 15:47:47   First time here. Took kids to the Habachi room. Very loud atmosphere. Rice kernals on table. Mentioned to server who didn't do anything to clean up. Ordered a beer which came without a glass. Requested a glass but was dirty. Asked about the beef- what kind is it? Server did not know. Had to leave table to ask. Mens bathroom also not clean. Meal service-chef excellent, the best I've seen. Kids loved him. Food good quality and portion size. Our chef was done and left. Another chef across from us was loud, obnoxious and obviously intoxicated. He did Sake bomb after Sake bomb with his customers. Next he loudly says "F this, and F thatâ and calling one of his customers a âmother f-ing Grisly Adamsâ- not once, twice but three times! The other servers enjoyed this debacle. Xtremly unprofessional! We hurried up our dinner and left. When I spoke with a manager, he apologized and said they would have a staff meeting on this. He did not take down any of my contact information. —dt112712