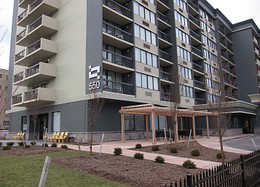 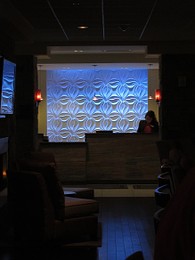 The Strathallan DoubleTree by Hilton is a famous hotel in Rochester. It is also the location of Char Steak & Lounge. During the winter of 2015 the owners added a 9th floor and opened Hattie's Restaurant in June 2015 with outdoor rooftop dining, as well as additional event space. The entire area is glass enclosed showing full views of the city and surrounding area.

The site was originally one of East Avenue's grand Victorian mansions. Alas, the mansion was torn down in the 1970s, when the Strathallan was built as senior housing. It was finally converted to a 151-room hotel in 1979.

In 2013 a mansion next door, Seven on Strath, was purchased and converted into additional suites for the hotel.

In 2015, the owners acquired the Century Club of Rochester to manage events for the club as well as for the hotel.

In 2016, the owner opened the Strathallan Spa, which became the Ape & Canary.

The Strathallan Hotel underwent extensive renovations in 2012 after reverting to local ownership. Developer David Christa and his partner were deeply impressed with the postcard-perfect skyline views from the unfinished ninth floor. Christa Development Corp., Morgan Management LLC, Essex Hotel Management LLC, and NH Architecture Inc. - all local firms - subsequently decided to collaborate on a $10 million makeover. A deal with Hilton changed the name to Strathallan DoubleTree by Hilton, promising a more upscale experience than the DoubleTree in Henrietta.

The ground floor and lobby were also extensively redesigned, with an exercise room and the Strathallan's first pool. A meeting space was added to the ninth floor. The new Strathallan completed renovations in August 2012 and is open for business.1


2008-10-24 11:33:38   (Update on 2/11/13 - Spoke with a friend & the whole place has been remodeled, new owners.) My company recently had a 2 day meeting there. It sucked. The food was lousy and cheap, the staff did not seem to care, the supplies like silverware or coffee always ran out and the staff was nowhere to be found, there were houseflies flying around in the meeting room. The meeting room was 67 degrees in the morning and 74 in the afternoon—no middle ground apparently. The tablecloths were still dirty when we came in the second day, and the staff stopped cleaning/busing at 11, when our meeting went to 5. Never again. —BadFish

2011-04-04 06:45:17   This is an older hotel that has struggled in recent years. Seems like it's barely afloat. Some of the rooms have been updated, I believe. It's in a great location, though, within walking distance of the Cultural District (perfect for the Jazz Festival) and not far from the Park Ave. restaurants. My parents often stay here when they're in town and don't mind it. —KatieSchmitz

2011-05-13 18:09:24   In January, I reserved a room with two queen beds for my family, who were coming to Rochester for my Commencement ceremony in May. When they checked in, they learned that they were "upgraded" to a room with one queen bed and one pull-out sofa (and a microwave and lots of other things they didn't need). All they really wanted was a room with two queen beds. Who calls getting a sofa bed an upgrade? There are apparently no other rooms with two beds available because it is a busy weekend. This is a very special weekend, and I was very disappointed with the customer service at the hotel. —Heidi

2013-01-30 15:13:09   Please note that the Strathallan went through a complete renovation (completed August 2012) and is under new management. All reviews prior to this date do not reflect the updated property. —WeMakeNiceWebsites