Ted Cohen's Economy Office Furniture sells new and used office furniture. They were founded by Mr. Cohen thirty years ago and originally located on Jay Street. The company was purchased by Wigberto Perez in 2005 and moved to 749 Monroe Avenue. They are now in Henrietta.

Their former Monroe Avenue location is currently being redeveloped into Button Lofts. 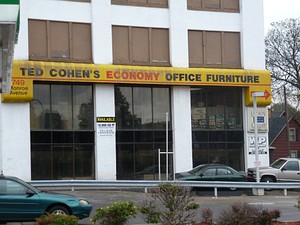