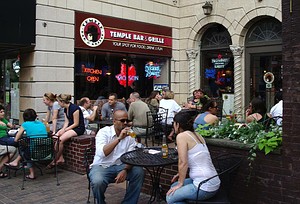 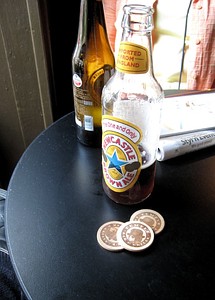 Temple Bar & Grille is a bar and grill in the East End. They offer a selection of appetizers, salads, paninis, wraps, burgers, sandwiches and desserts to go with your drinks. The bar and grill is available for catering and parties.

They have a quiet ambiance, targeting the young professionals of Rochester with a dimly lit pseudo-Irish bar that, while often having a game on the television screen, is loath to be called a sports bar. There is karaoke on Thursday.

Located in the One Eleven on East.

It was much better when it first opened as the Eastman Lounge. If the owner would have advertised, even once, it may have made it. —MrRochester

2013-06-14 16:02:57   Such an odd time to tell me that your kitchen is closed and you cannot feed me lunch: A) 3 p.m. on the day of the East End Music Festival, an event that I would think would overwhelm you with business, and B) at the very same time you've just plopped a huge plate of wings in front of the fella next to me. Thanks, Temple Bar! —AaronBPryor