The 23 Psaegz is a large, multi-instrumental freak-folk band based in Rochester, NY. Headed by Seth Faergolzia (of the now-defunct, NYC-based project

Dufus), the Psaegz frequently play at the

Bug Jar and other Rochester venues. They are currently on a summer tour, making numerous stops along the east coast:

The 23 Psaegz originally gathered in order to learn and perform Faergolzia's stream-of-consciousness-y puppet rock opera, also named "The 23 Psaegz," but has evolved into a close-knit backing band (that's not quite up to 23 members — yet) for Faergolzia's unique and memorable musical creations. As it stands today, the group includes a mini-choir, a tuba player, a bass guitarist, an upright bassist, a banjo player, a flautist, a saxophonist, a cellist, and, of course, Seth Faergolzia, a masterful vocalist, guitarist, xylophonist, kick drummer, and whistler.

Seth Faergolzia and the 23 Psaegz released their debut CD on April 28, 2012. Seth has since toured solo in Europe four times in 2012-13 as well as touring the west coast. 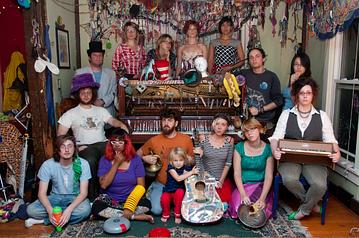