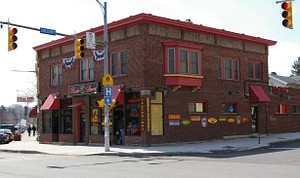 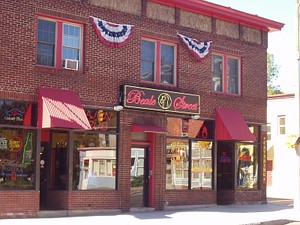 The Beale, formerly known as Beale Street Cafe was a New Orleans-style bar and restaurant in the South Wedge neighborhood, at the bustling intersection of South and Gregory. They offered live music on weekends. Catering was available.

There used to be a second location at 1930 Empire Boulevard, Penfield but it closed in February 2015. Original location closed February 12 2017.


2008-04-30 23:17:29   Having heard good things about this place, I went there one day for dinner. It's pretty cheap but... I was underwhelmed with everything I had. It's probably the fourth best Barbeque place in Rochester. It's probably a taste thing, since I prefer Memphis/Texas Style barbeque to Louisiana style. —NoahLeaf

2008-07-27 09:51:21   Had dinner at the Webster location last night - Tried the Etoufees delicacy made with the Cajun Holy Trinity - peppers, onions and celery. Had the chicken on a bed of rice, and smothered in a tangy roux based gravy sauce with the Trinity. It was DELICIOUS and a very large helping (couples could get a second plate and share this). Wait staff was very courteous and responsive. Will go back some Tuesday or Wednesday to catch the Blues. —BradMandell

2008-07-31 16:39:41   I'm not too high on the food at this place. Last time I went I got a meatloaf sandwich that was dry and bland. However, the food is fairly affordable and the ambiance in the bar makes it a decent place to stop in for a drink. —JohnHavard

2008-12-09 12:39:02   Good atmosphere but the food pales in comparison to the Dino. Apparently, the chef hasn't met a meal that doesn't deserve mountains upon mountain of cajun spicings added to it. The etouffee should have been better than it was or I at least should have been able to taste something beyond the cajun spice. —BatGuano

2009-03-06 13:36:30   Just had lunch there today, and I don't think I'll be going back. Prices are ridiculous...$12.99 for a fish fry that is nothing special at all, in fact lesser quality than many other establishments, and higher priced. The pulled pork sandwich was on a 1/2 stale plain roll, and the pork seemed like it was from a package or something, dry and boring. I think they are trying to be something they aren't. I used to like this place, but the last 2 times it's been pretty disappointing....I'm done trying. Long Live Dinosaur! —Bolin

2009-05-13 19:50:49   someone mentions Beale St. in N.O.? can I get a road map? back up from the bar...I think you're thinking of Bourbon St. in N.O. I've thought it's a strange mix only because they lean heavy on touting 'Louisiana-style' food, but why not some Cajun/Creole music AND the blues? food alone doesn't bring people to Beale St. (Memphis) or Bourbon St. (N.O.). —jschmidt

After trying Unkle Moe's the other day, I don't think I'll ever be back to Beale other than maybe for a beer or two. The food here just doesn't cut it.

2009-05-17 09:03:30   Stopped in for a late lunch when we were out walking around the South Wedge. I had the Pittsburgh sandwich, my husband had wings. Everything was just okay. It wasn't terrible but it also wasn't super tasty. I agree with a prior poster- I must prefer Memphis style BBQ to Louisiana style because I think Dinosaur is far superior to Beale St. The bar is nice though, we would come back for drinks (we both had hurricanes with lunch and they were the highlight). —ShawnaLusk

2009-10-05 07:40:33   Been here many times and must say that my favorite ribs in the city are served here. Last visit did nothing to change my mind. Meat fell off the bone and there was just enough sauce to add right amount of flavor.On the other hand, my wife's etouffee had so much spice on it that she hardly could eat it.As always the bartender and wait staff did a great job. —almorinelli

2010-01-07 13:05:52   I've been here several times and have been disappointed but last night was a complete 180. I got the jambalaya with shrimp and the mud bugs appetizer. I couldn't have been happier with both my meal and the service. I think I finally found the items on their menu that they are good at. Sure, the prices are a tad expensive but the food and service made up for it. Well, I think having a $50 gift card helped a little, too. We also left feeling good that we supported a homegrown, South Wedge business. Next time we crave spicy food, I won't be so quick to pass Beale Street. —BatGuano

2010-04-17 21:57:17   This place has gone down hill! I had my baby with me ...I did not think I would have an issue. First we waited over an hour to be seated (it was not that busy). My waitress did not bring out a high chair for the first 15 minutes. We ordered our food as soon as the waitress came then waited for an hr. Our food was cold when it came.I sent my sandwich back to be reheated by the time I got it back it was room temperature. After all that I asked the waitress if she could at least take off the 1.00 charge for the babies rice. She said she could not do that. (((The Food is NOT Worth Waiting 2 Hrs For!))) —soph

2010-05-08 18:02:12   This place has decent food and a lot on the menu. Ribs were decent and the sides are not bad. OK service, excellent corn bread though. I just wish they brought back the fresh cut fries. —MetalFrost

2011-12-03 19:17:03   The Empire Blvd. location is now called "The Beale". The food was the same and was still pretty good. However, the new management is terrible. I had a $50 Groupon that the manager refused to honor. I ended up having to pay the entire $72 bill myself. Needless to say, this will be my last stop in. —StevePlace

2013-03-22 02:52:58   If you loved the Beale Street Cafe you will likely be disappointed with The Beale. Gone is the amazing, authentic Cajun food. Gone is the great service. Gone is the restaurant atmosphere. The nachos tasted like they'd been made a few hours before I even ordered them. The gumbo tastes like it came from a can, and the bread was stale. Sadly, this is among the worst food I have ever had at a restaurant. All my favorite dishes from before are GONE!! We had to wait forever to get served. I eventually had to get up to go find the waitress to discover there was no employee around, not even at the bar. I had to go into the kitchen. It didn't help that their "Blues" band played songs like "Take Me Home, Country Roads" and "Laughter in the Rain" - I kid you not. We won't be going back, which sucks because I really loved what it had been prior. —SeanO'Neal

2013-05-18 16:34:17   We've eaten at The Beale many times over the years, but haven't been in for the past 6-8 months or so. But last evening we were looking for comfort food close to home and ended up at the South Ave location. Service was prompt and friendly. I found some nice local microbrew on draft. My shrimp and grits was excellent (perhaps a bit oversalted for my taste) and my wife really enjoyed her cornmeal-fried catfish, and especially the red beans and rice on the side. We have found that the Beale's BBQ has slipped in recent years from what it originally was, but we still think the Southern/Cajun dishes can't be beaten here in Rochester. —jgerek