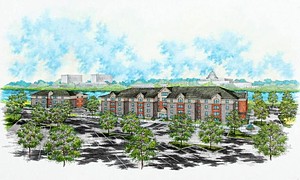 An artists' rendering of the complex from the parking lot, facing the river. Click to expand.

The Riverview Apartments are a University of Rochester residence hall for undergraduate upperclassmen located in the Plymouth-Exchange Neighborhood, bordering the 19th Ward. They opened in Fall 2008 and consists of 120 fully-furnished units ranging from two to four bedrooms. The five buildings are between three and four stories high. Because the apartments are new, they offer amenities not available in older dorms, such as air conditioning and separate living rooms and kitchens. In the summer months some of the apartments may be used for conferences and other residential programs. Each building has laundry and vending facilities.

The apartments are located less than a ten-minute walk over the pedestrian bridge extending from Plymouth Avenue to the UR River Campus. They are also served by the Green Line

shuttle bus, which is free for UR students, staff, and faculty. The parking lot accommodates roughly 300 cars.

The Riverview Apartments are part of the University of Rochester's extensive Brooks Landing Project. The groundbreaking ceremony was held on June 27, 2007.


2007-10-28 20:47:12   The actual buildings going up appear to have much less setback from Plymouth than the renderings suggest. —EricLarsson 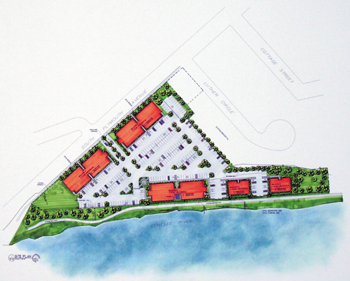 They are student housing only. —EileenF

2008-06-10 23:32:56   Feelings about this development among 19th Ward residents seem mixed (Yes, technically this is in PLEX, not the 19th Ward, but it's close enough to count). Some people like the clean, new construction in a section of the city that was neglected for a very long time. Others, however, are disturbed by the large fronts with narrow openings. This latter group refers to the complex as "The Fort". —DaveMahon

ribbon cutting ceremony was August 7 and featured Joel Seligman and Robert Duffy. The head of Residential Life was quoted in the press release as saying, "The complex filled to capacity and has generated a lengthy waiting list." —DaveMahon