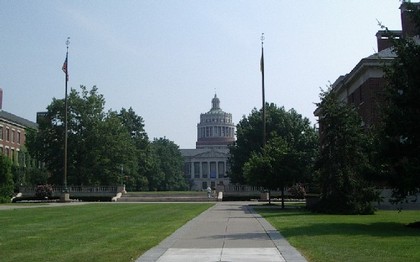 The University of Rochester is one of two universities and several colleges in Rochester, NY. Although small, it is a nationally recognized university with notable influence on academic and medical research, especially in the areas of optics and cognitive science. Originally located on Prince Street, its hub and main campus is now the River Campus.

UR is also the home of Open Letter Books, a non-profit publisher of contemporary international fiction and poetry.

In October 21, 2011 President Seligman announced the launch of the public phase of a $1.2 billion Meliora Challenge fundraising campaign to benefit all areas of the University.

Interaction with the City

Some think that UR students are typically uninvolved in Rochester and mostly stay on their island-like River Campus, which is bounded to the east by Mount Hope Cemetery and to the west by the Genesee River. Many, particularly freshmen, might tell you that the highlight of their week is when they take the free Saturday bus to the mall and Wegmans in Henrietta. Fortunately, more free bus routes have been added over the last several years and it's getting easier for students to leave campus. Areas often frequented by students include Park Avenue, East Avenue, Alexander Street and the South Wedge.

In an effort to get students to visit more off campus sites, the university created a program known as RED Rochester Every Day. Most students know this as the "Red" program, and it allows them to receive special student discounts at many businesses in the Rochester area.

More recently UR went even further and developed College Town in the Upper Mount Hope neighborhood, adjacent to URMC. Work began in May 2013. See the page for more information.

The student body at the University of Rochester is incredibly diverse. Students come from a variety of backgrounds, and many can boast membership to several campus organizations. Among these organizations are community service groups, a capella troops, sororities and fraternities (located on the Fraternity Quad), and intramural sport teams. See

UR View Clubs Page for a complete list of campus clubs.

Refer to the International Community page for information about the role and integration of international students into campus and community life.

Compared to other Universities

US News and World Report ranked the University of Rochester 34th of all the universities in the United States, tied with NYU, Boston College, and University of Wisconsin-Madison. 1

UR was named one of the

The MPAA has listed the University of Rochester as #17 of the top 25 schools for movie piracy in the nation. 2

UR has several libraries open to both the University community and the public.