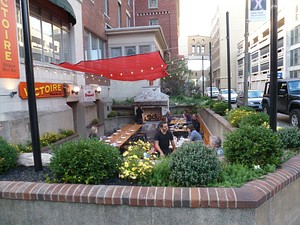 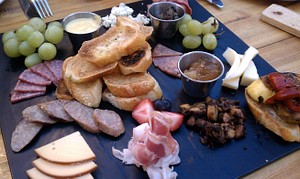 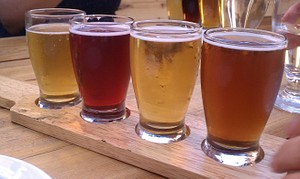 Victoire, which billed itself as a "Belgian Beer Bar", is a bar located in the middle of the East End nightlife district. They specialized in Belgian and Belgian-style beers, from standard offerings to the more complex dubbels, tripels and the powerful quads. They also served Belgian-inspired food, including eight variations of moules-frites (mussels and fries).

Victoire opened June 22, 2012 and is located in the Rochester Club Centre. Closed 2018. Will be replaced with a German Style pub called Unter Biergarten.

2012-07-04 20:38:10   Awesome edition to downtown. Cool interior, awesome deck if the weather is nice for it, and top notch beer selection. All the beers are Belgian styles, and they have around 25 taps as well as a bottle list. The best part was the bartender actually knew the beers which is helpful if your not familiar with the styles. Didn't get any food, but the menu looked interesting. Check this place out! —georgebluth

2012-07-14 13:24:55   Had dinner and drinks on their outdoor patio during the East End fest and was surprisingly impressed. I say "surprisingly" because I typically expect to encounter problems with service, food, etc at newly-opened restaurants .... but everything here was fantastic! Hard to believe they've only been open a couple weeks. Waitress was attentive without being annoying, and everything we ordered was delivered promptly. The reasonably-priced menu ($10-$16 range) featured a variety of tasty-looking eclectic items. My husband and I opted to share the Endive Salad and Duck Confit Reuben. Both were delicious, and the salad was accompanied by two very yummy bacon-wrapped figs and potato-cheese croquettes. I normally avoid French fries because they are so greasy, but the fries that came with the Reuben were anything but. Additionally, mention must be made of the beer, of course – there are at least 15 on draft, mostly Belgians/Belgian styles. Although I am a craft-beer fanatic, I detest the banana-clove taste present in many Belgians, so I was very wary/skeptical of trying their beers ... but the knowledgeable waitress helped me select ones that lacked this characteristic. Overall, I give this place a 10 out of 10! —ajh

2012-07-14 21:27:30   My wife and I recently had dinner on their outdoor patio. We opted to share an order of mussels (Farmhouse Ale) and the duck confit reuben. I think we would both agree with ajh (above) that the reuben was fantastic. The mussels were good too - solid 8/10. Both orders were accompanied with fries and three different aioli - spicy, garlic, and some other (good) flavor - all of which were delicious. The beer selection, as you would expect, was extensive and the two beers we tried were nice and refreshing. The only hiccup with our experience was the service; it was very... slow. However, between the food, the beer, and the kickass patio the service was nothing that would keep us from coming back.. and come back we will! —Bucksmack

2012-07-28 22:07:02   Went here on 7/27 after work for drinks and dinner. Great beer selection, they had Saison Dupont on tap which is a wonderful thing. The food was excellent as well, I got the Victoire Moule Frites which were very flavorful, they had about 8 varieties of Moule Frites and I would like the try them all. I also got the charcuterie plater which was fantastic! I will definitely be back! The service left a lot to be desired, the bartenders were nice but the waitress was not attentive at all. —markrizz

2012-07-30 18:47:41   We were here with friends this past weekend, had a great time. We tried all of their small plates along with the mussels, and were very happy with everything that we had. The four-glass beer flights make it easy and fun to sample a variety of beers without drinking too much! For us the service was perfect, we had no complaints. The bill for four beer flights and four dishes was $100 before tip, so about $ 25 per person, which we felt was very much in line with the quality of the experience. —DottieHoffmann

2012-07-31 13:03:19   Came here for the second time on Friday night, after a not-so-great first experience. Things definitely are still sub-par. Service is VERY slow. We started with the wings - the sauce was good (a BBQ sauce), but the wings were not crispy at all and were doused in the sauce. They needed to be cooked at a higher temperature in order to make them not soggy. We got 2 orders of mussels, which are good and the broth is good, and the fries are good as well but portions are small and fries are not seasoned. They say it is 1 pound of mussels, but when we make the 2 lb Wegmans bags at home, we can't finish them all, and we easily each finished the "1 pound" serving here - didn't seem like a full 1 pound. Our friend got the burger and thought it was ok. Beers are good but not having prices on the menu is really unnecessary and definitely a sticker shock when you get the bill. We also had to correct the bill because an extra order of fries was $5 on the menu but $6 on the bill - I know it is only $1, but you shouldn't have to check your bill prices and compare with the menu prices! We have gone here twice now and not been very impressed. This place needs some work in order to get people to keep coming back. Also, why do the servers say "Victory" when clearly the name of the restaurant is "Victoire"? Seems like they are definitely trying to be something they are not. —goldengirl217

2012-08-08 11:35:29   Belgium is actually 60/40 Flemish speakers to French speakers, so giving it a French name is not inappropriate. I just wish someone would have known Geography and English before they had their signs made. It should be a "Belgian Beer Bar" NOT a "Belgium Beer Bar." We don't talk about "Ireland Pubs." —jasonharemza

2012-08-17 08:07:05   Went here alone for lunch in the middle of the week. After a brief wait for staff to appear, had no problem being seated inside, one-for-lunch. Apart from one small bone in the duck confit reuben, it was a competent sandwich. Didn't ask whether the confit is prepped on-site or sourced another way. Most of the beers are imports (as expected), but there might have been one or two Ommegangs. The sidewalk side said "Victoire" on one side and "Victory" on the other (and "rueben"), so it seems like the identity crisis is still in effect. Here's hoping they pick one name and just own it. —Kwandellpeterson

2012-11-27 13:50:18   I've been here twice. Once on a Friday night; it was packed, it took almost an hour to seat our party of six, and it was pretty loud. However the food, beer and service was great. While we waited to sit we were just at the bar eating appetizers and drinking. I also was here last night (a Monday night) and it was almost deserted, maybe only 5 or 6 tables with another 6 or 7 people at the bar. Food again was great. My advice is go on a weekday night to avoid the crowds. —AdrianMartin

2012-12-09 10:39:13   Generally I've had positive experiences with the place. The beer is very good (provided they're not running out of everything, which happened once when I went), and the food is good too (especially the mussels). The single most irritating thing about the place is all the damn TVs. The dining room is dark and intimate and it would be a nice place to sit and chat, but EVERYWHERE you look there are BIG SCREEN TVs with ESPN and FOOTBALL and they really stand out in the dark room so you can't help but look every time one of the football players does something dramatic. It's so tacky and kinda spoils the experience for me. If you can sit outside, do that. There are no TVs there. —AlexFine

2012-12-17 13:28:09   I've been to Victoire a couple times now and food has be consistently good. You can never go wrong with any of the mussel dishes. For some reason, I've had two different version of the french fries, one good and one bad...so i don't know what happened there. The service isn't something to write home about. They're just kinda there. Overall I'd keep going back just for the food...so i guess that's a 'victoire' lol —CMonkey63

2014-04-05 12:05:28   We stopped in for dinner last evening and really enjoyed ourselves. The bar was bustling around 7PM but we only had a short wait for a table. Both of the Belgian beers I had were very good - especially the sour red. Both my mussels and my wife's chicken were tasty and well prepared. They came out of the kitchen amazingly fast for the number of clientele present. There seemed to be some liberties taken with the ingredients in the food, so if you are limited in diet be sure to ask beyond the description that is on the menu. (Also my portion of mussels seemed to be a bit slight for the "1 pound" that were advertised.) The Now on Tap list on their website late yesterday afternoon had little resemblance to what they were offering in the bar at 7PM. Prices seem on the high end but the food is high quality. We especially enjoyed listening to the acoustic guitarist that played during the dinner hour. We will be back! —jgerek

2017-10-14 19:56:54   I think Victoire may be undergoing a rebranding. There is a place called Unter Biergarten that has job ads posted on Craigslist for positions available. It is slated to open later this month. A quick google search brings me to Unter Biergarten on Google Maps, which is located at 120 East Ave. —DE