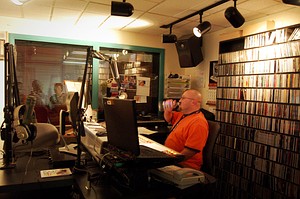 DJ Uno in the WBER studio

WBER is a local independent radio station that is sponsored by Monroe #1 BOCES through EMCC (Eastern Monroe Career Center). With the tagline "The Only Station that Matters," WBER specializes in alternative music. Covering a wide range of genres and eras, WBER has specialty shows for independent music, '80s new wave, and local artists. Additional shows are hosted through local high schools, such as Brighton, Webster and Irondequoit (WIRQ). Program listings are posted on the website. 'BER's website allows listeners to vote on prospective songs, and the station also has a year-end listener vote for a top-100 countdown of the year.

WBER is commercial-free, and an MP3 stream is available on the website.


2008-02-01 11:37:30   The biggest musical influence of my teen years; it continues to keep me interested in new music. One of the my favourite things about Rochester. —AutumnHaag

2008-12-10 13:00:12   I have a love-hate-love relationship with WBER. I listen to it until I hate it and then I tune back in because I love it. I've repeated this cycle with WBER since I was a young buck. In any case, it's one of the best parts of living in Rochester. —BatGuano